Artistic giants walk among us in Oklahoma City. They hail from our ancient Native American communities and our immigrant populations from Vietnam and other countries. They are the descendants of our early settlers and they are our newest transplants. The artists of a society are at once our dreamers, our historians and interpreters. Art connects us and artists are our conduits. 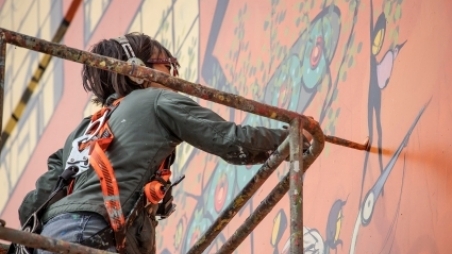 Denise Duong’s work is filled with mesmerizing, whimsical, slightly otherworldly people and creatures who are connected by flights of fancy, tendrils of hair becoming waves of water, bicycle wheels spinning into Ferris wheels, flowering vines lacing them all together. Figures often appear in silhouette or profile, with large, childlike heads. Large sunglasses. Victrolas and old-fashioned motorcycles dot her landscapes.

At first, though, it was bears. As a child, Oklahoma City muralist and painter Denise Duong knew two things for sure. She wanted to be an artist and she loved bears. She drew packs of them, over and over. Their familiar form captivated her, plus there was Annie. That was the name of Duong’s favorite stuffed bear when she was a little girl. Annie, her constant companion and muse, whom she loved with the sweet fervor only a child with an imaginary friend can muster. Annie, whose form she knew by heart. Annie, who she later learned was actuallya raccoon.

It was a shock, to be sure. “It was the tail that gave her away,” Duong says, laughing. Maybe thanks to Annie’s years of hiding in plain sight, Duong’s art is full of little secrets. Take a minute to look and little birds start to appear, or a woman’s hair might also be a cloud.

Shown regularly at JRB Gallery and her own Little D Gallery in the Paseo Arts District, her imagery was described in a recent exhibition catalogue as showing ‘the inevitability of change at an adaptable, inviting, and human scale, as we journey with her characters through their poignantly cartoon-like escapades. In some we see her dog, a charming white bull terrier, anthropomorphized as only a dog lover could do  at once comic and gentlemanly. In other works, the depiction of social relationships belies Duong’s deep grasp of the human psyche  the daily interactions of two people in love, out of love, on a bike ride, doing business or caught in a windstorm. Like Shel Silverstein and Edward Gorey, Denise is able to provide human comfort in charming caricature.’

All of that rings true.

Denise Duong is a Vietnamese American artist and muralist from Oklahoma City who studied sculpture and printmaking at the School of the Art Institute of Chicago. Her work includes drawing, painting and large-scale murals, scattered throughout Oklahoma City, Tulsa and beyond. Several of her murals are on view in Oklahoma City, at 21c Museum Hotel in the Train Shed on the patio of Mary Eddy’s, and in the West Village and Plaza districts.

Growing up with an immigrant family in a city that cultivated individuals’ imaginations helped form Duong’s fascination with state lines, oceans, skies, and emotions.

All of these things play an integral part of her art’s growth and inspiration. Her narrative works on canvas are created with acrylic paint, paper, watercolor and ink. There are a handful of characters that repeatedly show up in Denise Duong’s work. She hasn’t named them but thinks of them as friends and finds it cathartic to draw their shapes.

When she’s in Oklahoma, she’s painting in her studio at all hours of the night, when things are quiet and she has the world to herself. If she’s not in her studio, odds are good that she’s skipping around the globe, gathering imagery to bring back to her work.

As a child, Duong drew and drew. She knew she wanted to be an artist, but had also intuited that saying so led to, if not discouragement, something close. But she never wavered, and it seems unlikely that any other path would have suited her.

As a high schooler, nationally renowned glass-blower Toby McGee drove the backroads of his native Kansas with his buddy Danny Carey, hammering out an ethos that would carry them into adulthood. First and foremost, neither wanted to sell out and end up working some dead-end, soul-crushing corporate grind. McGee laughs as he tells this, and he should. Both men remain true to their pact. Carey is the drummer for the rock band Tool, and the closest McGee, a working artist, has come to working for ‘the man,’ was teaching college-level glassblowing.

McGee’s artistic awakening occurred years earlier. In eighth grade, to be specific, in Paola, Kansas. “My grandfather lived in Paola, across from the courthouse. I had an assignment to draw a building, so I chose that one. My grandpa was so impressed, and that made me feel good,” McGee says. He kept taking art classes and enjoyed them.

A few years later, heading into his sophomore year, he nearly lost his way. “I decided that I wasn’t going to take art classes, I was just too busy. My dad was the high school principal, so I knew all of the faculty. The art teacher was a man named Ron Layden, and he basically took me aside and scoffed at me about being too busy. Here he was, teaching full-time and making his own art  he basically shamed me back into art, and if he hadn’t that would have ended my art career.”

A few years after that, McGee was studying art at Emporia State and took a glassblowing class, and that was it. “The first time I dipped into a furnace I was hooked. It was SO hot. I thought ‘this is so dangerous, why are they letting us do this?’ It was so thrilling. It demands your focus.”

Melted glass is malleable at about 2100 degrees Fahrenheit, a fact that thrills McGee to this day. His glass furnace, housed in his backyard studio, is always hot and there’s always glass in it, waiting. “Glass is still a challenge, still difficult after 40 years of blowing. You’re always pushing the edge of control.”

About two summers ago, McGee was sweating it out in his studio. The heat that summer was brutal. Add to that the inherent heat of molten glass and, well, uncomfortable is an understatement. He’d been creating a group of pieces featuring a technique that has become his signature, a landscape pattern blown right into each vessel. It’s not that he was burned out, but he was weary.

“My wife suggested that I shut the furnace down for the summer. At first, it sounded crazy, but I did it and it was fantastic. After a month of not making anything, I became restless,” he says. Heather, Toby’s wife, is an artist as well  she paints on gemstones  and understands the creative process better than most.

Inspired by an assemblage of stacked stones and driftwood he created as a centerpiece for a new dining room table, McGee began experimenting with making blown glass ‘stones,’ which he sandblasts and stacks into cairns. “It’s very simple but very exciting. Sandblasting gives them a matte finish. People see them and they really resonate.”

These days, McGee works in his Oklahoma City studio every day he’s in town, creating his trademark ‘landscape’ vessels and his new, ‘stacked stone’ pieces, which he packs up and sells at juried art festivals around the country. He, like many fine artists, follows the weather. February finds him in Florida, and in March he heads for Texas. April finds him at Oklahoma City’s Festival of the Arts, where he has shown for more than 30 years. In May he makes his way north to Kansas City. It’s a good life.

It’s getting dark outside and Choctaw artist DG Smalling is presiding over a small group of friends in his massive studio and living space in downtown Oklahoma City’s Carnegie building. It is at this moment he insists he saw (and spoke with) a two-headed person at a TJ Maxx in a small town in Clearlake, Texas. And because of Smalling’s globetrotting life, and amusingly persuasive delivery, it seemed plausible, and somehowlogical.

To reach this conversational pinnacle, we have galloped from topic to topic, beginning with the arts and Smallings’ childhood, his philosophy, a dabble of politics, some of the many projects he’s involved with in 2020, his favorite international grocery shops in Oklahoma City and now this. A two-headed person at TJ Maxx. The story is a perfect encapsulation of the mischievous riddle that is Smalling, whose larger-than-life persona is roundly dwarfed by his talent and ambition.

Smallings’ paintings are propped against walls and hung haphazardly around a large room in the middle of his apartment. Two 8-foot tables anchor the center of the room, strewn with paint boxes and art detritus. Specimens from his ongoing collaboration with Barry Switzer here, a large dragon there and inside a closet, hanging in a neat row, are wooden chair-backs patiently waiting for him to pull them out of obscurity.

He’s juggling a handful of pretty massive projects here in the dawn of the ‘20s. There’s the furniture design project with Gary Platt, the largest casino furnishing company in the world (hence the hanging chairbacks), and a Smalling-designed slot machine in the works. There’s the joint museum exhibition at the Gaylord-Pickens Museum featuring Smalling and ceramicist Nicole Moan. He’s been tapped by Baroness Nicholson of Winterbourne, a British politician, to create portraits of all the historic treaty signings between Tribal Nations and Great Britain. He’s working on a collaboration with the one and only Coach Barry Switzer. There’s a huge project with an Oklahoma casino/resort.

And there’s his painting, “Lady Justice,” which has become the namesake and symbol of Operation Lady Justice, a government-wide initiative aimed at addressing the crisis of missing and murdered Native Americans. Smalling created the painting during a National Native American Heritage Month event held by the Bureau of Indian Affairs in Washington, D.C., in November 2018. “Lady Justice” was displayed at the White House during the signing of an executive order establishing the Task Force on Missing and Murdered American Indians and Alaska Natives.

Smalling grew up all over the world. His parents are missionaries. The family left the States and landed in Switzerland, where elementary school included daily painting and poetry. “It was such a shift,” Smallings says. The family rented an apartment from a couple who lived on premises, and young DG found a grandfather figure in the husband. “This was a man whose idea of relaxation was building functioning model battleships. He wore bespoke shirts and used a Montblanc pen to mark the wood for his projects because he said pencils breed error,” Smalling says. He traces his artistic style of drawing with one single line directly back to this man. “It’s creativity through constraint,” he says.