As the number and caliber of artists have grown in Oklahoma City, so have the number of galleries. Our City, thanks to some visionary policies, now fosters the creation and placement of public art. Sculptures greet us at intersections or surprise us on bike trails. The Paseo Arts District, the Plaza District, the downtown Arts District are dotted with excellent galleries, and Uptown 23rd now joins their ranks.

JRB Art at the Elms

Has a painting or sculpture ever spoken to you? Joy Reed Belt, owner of the Paseo’s JRB Art at the Elms knows why. “Art is the oldest form of nonverbal communication. Historically art was used to record. People wanted to leave a record that they existed,” she says. “Art then became a way to help people imagine beauty or better conditions. As society became more civilized, more and better pigments emerged. Art has always reflected who we are as a people and who we would like to be as a people.”

Belt is herself fascinating, a student of art and a force of nature. Her office is an exuberant cacophony of art, antiques, books and gorgeous furnishings. To find it, one must traverse down a small side passage in her venerable gallery, one which has become the anchor of Oklahoma City’s vibrant Paseo Arts District. The building that houses her office  and gallery  has been the center of the Paseo’s art scene for nearly a century, but more about that in a bit.

Are you a fan of the Paseo Arts District’s monthly First Friday Gallery Walk? You can thank Belt, who along with her late husband John Belt, worked for decades purchasing property in the Paseo and filling it with art. “In 1999 John gave me a gift of painting lessons to help me relax,” she says. Turns out she was a natural, with a great eye.

Lessons led to workshops, which led to Belt renting a small studio space from her husband. For her, it seemed like the most logical thing in the world to hang the work of other artists in part of her space. “I sold some pieces. BJ White brought me a piece of hers to hang, and I gradually started seeing that artists needed this  so I’ve become a sort of den mom for artists, and I’m the interface between them and the public.”

It’s important to realize that without a painter named Nan Sheets, there would be no JRB Art at the Elms. In fact, Oklahoma City’s vibrant art scene might not be here either. Sheets was a prolific and successful artist and was included in Who’s Who in American Art in 1923. Her work hung in the Dallas Museum of Art, the Witte Museum and the Fort Worth Art Museum.

Sheets turned her home in Oklahoma City, "The Elms", into a salon for local and visiting artists. Every summer she traveled and painted, offering her work for sale upon her return. In 1930 she converted her home into a commercial gallery, the first such space in Oklahoma City. She was invited to become co-manager of Oklahoma's earliest New Deal project, and eighteen months later began directing the Oklahoma Art Center of the Works Progress Administration. In the 1940s, she and other supporters turned the Center into a museum, and for the rest of her career she remained closely aligned with the institution, serving as its director for over fifty years.

Sheets’ gallery, and her legacy, are in excellent hands. JRB Art at the Elms is filled with art, inspiration and, thankfully, Joy.

There are dozens of art galleries throughout Oklahoma City and the larger metro area. We’ve assembled a handful that we think offer a good representation of the wide array of artistic endeavors and styles happening here in the Capital City.

Twenty-five years ago, Joe and Laura Warriner bought a building in need of some serious rehab. The 20,000 square-foot warehouse had plenty of potential, it just needed the right people to see it. A pioneer at heart, the Warriners’ building at 1 NE 3rd ST in Oklahoma City, was one of the very first to bridge the gap between what is now Automobile Alley and Deep Deuce/Bricktown.

“We had no A/C when I bought the building. We’d have Friday night movies with popcorn, and we’d open up the doors for a breeze,” Warriner says. “When we first opened, it was more about raising the bar for the level of exhibitions, specifically for contemporary art, in Oklahoma.”

Before the Warriners stepped in to save it in 1995, the warehouse sat vacant for 30 years and sustained damage in the Alfred P. Murrah Federal Building bombing earlier that year. After their purchase, the property was transformed from a dilapidated industrial warehouse into an exhibition space for the visual arts called Untitled Gallery. In 2003, the Untitled Gallery became Untitled Artspace, a 501(c)(3) nonprofit contemporary art center, currently known as ARTSPACE at Untitled.

Each month of the school year, Oklahoma City Public School students visit Artspace’s studio to create, learn and experiment with art. With the help of ARTSPACE’s Education Director and local artists who serve as program mentors, this free program prepares Oklahoma students for a future of possibilities through an interdisciplinary art curriculum.

“We had no intention of doing what it’s evolved into. When we bought it, it was all about saving the building and having a place to create,” she says.

Warriner left the day-to-day operations of ARTSPACE for a bit, when her husband Joe became ill. After his passing, she returned, only to find that the world had changed. “When I came back, there were apartments here, but I realized that the young people living in them never came to the gallery, so I built the garden to draw them in, hoping they’d climb out of their caves to venture over. I realized that most hadn’t been exposed to much art because it had been taken out of their schools, so they weren’t necessarily curious about us.”

ARTSPACE evolved into more of a makers space, with programs for high school students and teachers, affordable studio rentals for artists, and a slew of events aimed at encouraging interaction. Without ARTSPACE, would there be a Factory Obscura or Art Hall? Thankfully we’ll never know, but our suspicion is that the arts in Oklahoma City would be far less vibrant and varied without it.

DNA Galleries is an artist made retail shop and contemporary art gallery focusing on Oklahoma artists and artisans. Its doors opened a decade ago in the now revitalized Plaza District near downtown Oklahoma City. From the beginning, their goal has been to celebrate, support and foster the creative minds of our community.

Exhibit C Native Gallery & Gifts is a 4,000-square-foot art gallery and retail space located in the Bricktown district of downtown Oklahoma City. Proudly owned by the Chickasaw Nation, Exhibit C is used as a means to highlight talented Native American artists who represent their communities throughout Oklahoma.

The Howell Gallery was officially established in 1991 by Linda and Ken Howell. But even as early as the 70’s Ken, an architect and Linda, an interior designer, saw an increasing amount of artistic talent right here in Oklahoma that needed to be showcased.

IAO started as a grassroots organization in 1979. Founded by three poets, the vision was to create an organization to support a group of artists who went against the grain. Since then, IAO has grown to become the bastion of creative freedom for Oklahoma’s artistic community, with a space that supports programs for poets, visual artists, filmmakers, musicians, dancers and more.

Head for the Plaza District and then stroll around. You’ll love the moments of discovery as you find mural after mural. Plaza Walls is a curated, rotating mural project in the Plaza District of Oklahoma City managed and produced by The Oklahoma Mural Syndicate (OMS). The project was launched in September 2015 by Dylan Bradway and Kristopher Kanaly with approval by the Oklahoma City Arts Commission and Urban Design Commission. OMS was founded by Brandi Guthery, Dylan Bradway and Kristopher Kanaly with a mission to advocate and create public art throughout Oklahoma.

Art and the City

Oklahoma City has a public arts master plan. In the 1980s, the Oklahoma City Arts Commission was formed and in 2009, OKC passed an ordinance requiring that 1% of construction budgets for buildings and parks be allocated to public art, something that the City of Oklahoma City’s Arts Liaison Robbie Kienzle has worked for decades to bring to fruition. She oversees the City’s public art initiatives and speaks unequivocally about the transformative power of art.

“Art is a unifier. People who are different from one another, who may have different political beliefs or who may be demographically different from one another get excited about art; they may start a conversation with a stranger about a mural, but it’s more than that. Everyone deserves to live in a well-designed, beautiful and well-maintained home, and public art makes a city feel like that,” Kienzle says.

City leaders know that arts and cultural investments make cities great places to live, to travel and study, and more attractive for economic development. Their vision is supported by recent national studies that have found that cities with these types of community and economic benefits instill a sense of pride and loyalty in citizens often resulting in higher rates of economic growth. Public art also creates jobs. The City now employs an arts administrator, installers and conservators.

“We are always looking at the 50-year horizon,” Kienzle says. 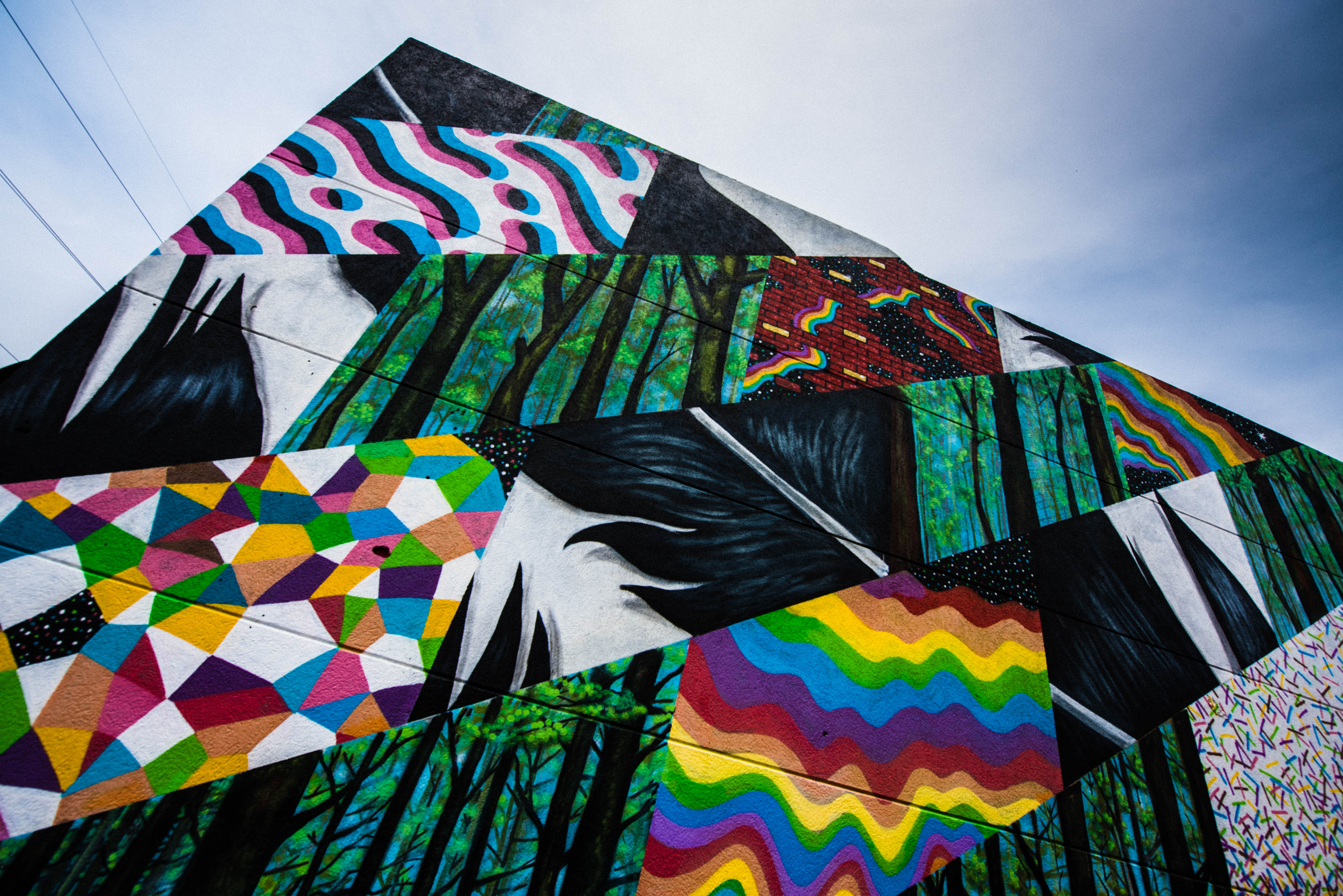