Bold, new artistic visions and collaborations that push the boundaries of ideas and creativity are an emerging, super-energized part of Oklahoma City’s scene. We’re now home to vast, immersive art experiences, galleries cropping up in unexpected nooks and crannies, and the kind of experimental art that can only thrive when the arts are appreciated, valued and supported.

Factory Obscura, the biggest test-tube baby you’ll ever wander through, was hatched in an incubator about four years ago.

It’s a playground for grownups and kids with an origin story that’s as quintessentially Oklahoman as you can get. Factory Obscura calls itself an Oklahoma City-based art collective creating immersive experiences that awaken wonder, build community and make the world better. Loosely fashioned in the vein of Santa Fe’s iconic immersive art experience, Meow Wolf, Factory Obscura now occupies a permanent location in Automobile Alley, fittingly in a warehouse that once served as Flaming Lips frontman Wayne Coyne’s art gallery.

There are five Obscura co-founders and they tend to travel in a pack, always mindful that they are a collective, which means no one person is the spokesperson. In fact, they don’t mind at all (and seem to prefer) that they not be quoted as individuals in print. Tammy Greenman, Kelsey Karper, Laura Massenat, Laurent Massenat and Hugh Meade are the soul of Obscura.

It all began with a chance meeting at the Homeland at Northwest 16th and Classen. Two of the five co-founders, Massenat and Massenat, felt Oklahoma City needed something that was as fun for adults as it was for kids. They bumped into Meade, who agreed. Karper and her business partner, artist Romy Owens, had launched their forward-thinking Current Gallery, and part of the mission was to foster art projects and host artists in residence, with the goal of launching new things into Oklahoma City’s art world.

The Factory Obscura group became Current Studio’s first artist-in-residence, a slate of 7 a.m. meetings ensued, a Midnight Dinner was held as a fundraiser, things were donated including massive amounts of scrap paper and on Nov. 11, 2017, Obscura’s first immersion production went live. It was free to the public but requested donations from attendees. Entitled “Shift,” the installation was the work of dozens of artists and volunteers. “We had a stretch goal of 7,000 people coming to Shift. Instead, more than 20,000 came,” Meade says. Or maybe Massenat.

Now the group had the bit between their teeth. Another temporary installation, “Beyond,” was staged at SW 15th and Robinson. This time the group secured investors and sold tickets. Part of the whole idea is that artists should be paid a living wage for their work and these days Obscura employs 18 people.

Now Factory Obscura has a permanent home thanks to investor and art lover Steve Mason, who owns the warehouse the collective calls home. ‘Mix Tape,’ its inaugural experience has been a smashing success and is still on view.

A new installation is in the works, as are classrooms, a 400-seat performance space, a culinary component and outdoor spaces. Volunteers flock to the group’s community work nights, so many that it’s become a hot ticket and advance registration is required.

When you turn a cadre of like-minded, but otherwise extraordinarily diverse, artists loose in a giant, funky warehouse, you get big doses of joy, wonder, community and for a little while you transcend whatever it is that’s bogging you down.

Terrific, you say, but what is it? That’s for you to decide. We can’t wait to see what happens next.

Tucked away in Oklahoma City’s Uptown 23rd District, sandwiched between a tea shop and a handful of office suites in The Rise building, is a gallery that feels like a secret. A bit like Platform 9 ¾, if you know what I mean. It’s an airy, pristine, longer and wider than ordinary hallway filled with fine art and awash in natural light.

Once you’ve found it, you’ll feel smart and savvy and you’ll want to go back. “Discovering that we’re here is a bit of an a-ha moment for people,” says gallery curator/manager Helen Opper. “We really strive to be an equal-access gallery. We’re open extended hours, it’s a very approachable space and there’s no attendant sitting there,” she says, meaning no stuffy attendant. Art is available for purchase, the tea house next door is set up to handle transactions, or, in another nontraditional move, the gallery’s art inventory can be purchased online.

Exhibitions vary and occur about six times per year. Of those, half are group shows curated from submissions to the gallery. “We have an open submission process, and we accept work on a rolling basis,” Opper says. “Our submission-based shows are wonderfully varied, and those are currently booked through 2020.”

The remaining shows are thematically curated and done so with the deft hand of a seasoned art professional, which Opper certainly is, having spent a decade on the coasts running galleries and opening her own fine art consultancy.

“Having an arts space in a mixed-use development is a great way to get people to interact with fine art,” Opper says. The gallery has also become an unofficial link between the downtown arts scene and the gallery-lined streets of the Paseo Arts District.

Art Hall was the brainchild of Anna Russell who, along with her husband, owns The Rise. “She and I met in the summer of 2016. I was looking for a space and Anna happened to be here. She is an arts enthusiast. She went to school in South Florida and was inspired by the arts in Miami,” Opper says. 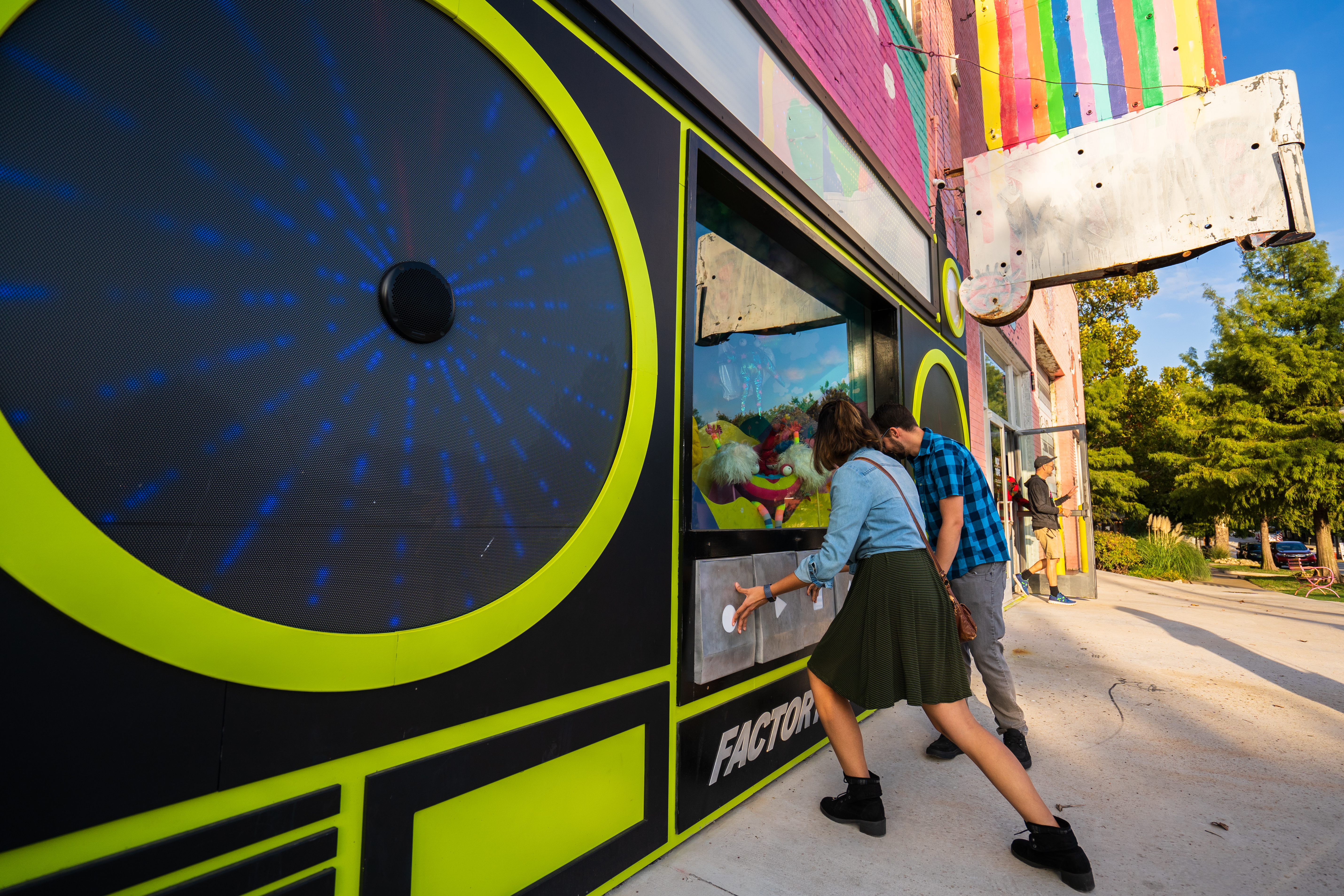