USA Todays front page featured Olympic hopeful Jen Burke with her kayak and paddle outside the Chesapeake boathouse. She had moved from San Diego to OKC to train.

This is an exciting announcement for the USOC and for OKC the new boathouses, finish line tower and proposed whitewater center will attract top events and athletes as well as enhance a vibrant downtown.

Great anticipation filled the Chesapeake Boathouse in a gathering of civic leaders who came to witness the historic announcement. In short order, the Olympic rings graced the Oklahoma River. It became the only river in America designated as a U.S. Olympic and Paralympic Training Center, the only U.S. river to fly the Olympic flag.

BRINGING THE OLYMPIC RINGS TO THE RIVER

The Boathouse District would be responsible for providing world-class facilities and training for national team athletes preparing for Olympic Games. It was about developing the sport and exciting youth about the opportunities here.

The new partnership included the University of Central Oklahoma in Edmond, which had been an official U.S. training site for volleyball, archery and Paralympic sports since 2000.

Present at the announcement was Olympic gold medal-winning native son, gymnast Bart Conner and his wife, another world-famous Olympic champion  the 1976 “Perfect 10” gymnast from Romania, Nadia Comaneci. Both are high-profile champions of Oklahoma.

The momentum of the stunning announcement propelled others. Ideas and plans lined up to be a part of it, signing on to help make history.

As a community, we believe in the value of the Olympic Movement. We hosted the U.S. Olympic Festival in 1989 and  support U.S. Olympic and Paralympic athletes ... I am so proud of what we have achieved through MAPS.

MORE: Bart and wife Nadia own and operate the Bart Conner Gymnastics Academy in Norman and headline a fast-growing annual Fitness Expo in downtown OKC, the Bart and Nadia Sports Experience.

Another energy powerhouse, Devon Energy, stepped forward to underwrite the second boathouse  demonstrating a characteristically generous spirit of community. The fact that this boathouse corresponds to the architecture of the first reflects the sense of teamwork the river fosters.

The National High Performance Center at the Devon Boathouse introduced many innovations. At two stories and twice the square footage of the Chesapeake Boathouse, it is designed and equipped to, in the words of Olympian Joe Jacobi, “win gold medals.”

To that end, its wow-factor amenities include a dynamic propulsion rowing tank and a high-altitude training chamber.

As home to the Oklahoma City University rowing and kayak teams, the angular blue LED lights on the Devon Boathouse “prow” created another signature for the riverfront, proclaiming the school colors. Training facilities are used by Olympic canoe/kayak hopefuls and OCU collegiate as well as OKC Thunder players and other elite athletes.

Day and night, the Devon Boathouse creates a striking image against the downtown skyline, the star of which is the sleek 52-story Devon Energy Tower.

The Devon Boathouse program prompted dedicated Sprint Kayaker and Olympic hopeful Jen Burke to move from San Diego to train for a spot on Team USA. She learned that U.K. Olympic gold-winning coach and Scotsman Shaun Caven had jumped at the chance to “jump the pond” to coach in OKC and he was her first choice for a coach.

Jen’s story landed her on the cover of USA Today, representing the trend in a surprising reversal of the Mother Road migration  this time, it’s people leaving California for Oklahoma.

Putting a fine point on OKC’s commitment to hosting prestigious championships is this mediagenic, four-story facility. Opened in 2011, the “FLT” was the third one-of-a-kind structure on the riverfront. Importantly, its design was approved by the Swiss-based International Rowing Federation (FISA), so recorded race times would be official.

Situated next door to the Devon Boathouse, it arrived as another river signature. The Chesapeake Finish Line Tower features wrap-around glass, open-air terraces with panoramic river views, and beneath its “prow,” a spacious sheltered spectator area.

The Finish Line Tower first offers judges designated seats with commanding views of the Finish Line. (In fact, the “line” extends from the water right into the Judges Room, tracing the floor at the judges’ feet!) On another floor are multimedia facilities and the penthouse is more than VIP-worthy.

The University of Central Oklahoma’s jewel box of a boathouse is
another inspired “vessel.” Yet here, music is also a theme  inviting consideration of the rhythms in rowing.

UCO’s campus colors are gold and blue, so gold LED lights define this angular boathouse “prow” with its natural blue cast. A scatter of golden glass windows suggests musical notes on a staff, and by day, casts patches of golden light onto interior spaces.

As the boathouse name suggests, Chesapeake Energy (stock symbol CHK) partnered in this effort. The boathouse is home to the UCO women’s collegiate rowing team, adding luster to the river’s roster of community-minded universities.

UCO is revered for two music programs: the venerable UCO Jazz Lab and the ACM@UCO School of Rock in nearby Bricktown. ACM@UCO is the only stateside extension of the renowned London-based Academy of Contemporary Music.

So, including a jazz venue here was a natural. It overlooks the river and seats 160. With the riverfront vista as a backdrop, performances on the elevated stage is thrilling for performers and audiences alike.

The art gallery came as an unexpected asset for the UCO Fine Arts program and for guests  and this boathouse has many.

And here, another boathouse joined the “race,” its “prow” breaching the water’s edge. And given UCO’s significance as a U.S. Paralympic Training site since 2009, it was a perfect fit.

In 2014, another energy company stepped in to establish a riverfront presence -- the first open-air variation on the angular boathouse signature and another “prow” taking its place at the water’s edge.

The SandRidge Youth Pavilion arrived with a specific interest in youth, families and fitness. Adjacent to it are two star attractions  the towering SandRidge SkyTrail and SandRidge SkyZip. Both invite non-rowers to enjoy the river on dry land and the air.

The 80-foot SkyTrail ropes course tower features six levels of challenge that advance in difficulty as climbers ascend. (Tackle rope bridges, balance beams and zig-zag elements in the sky!) The safety harness is secured, so climbers are free to be daring. At the top, the reward is one spectacular 360° view.

For the descent, four choices: a 72-foot corkscrew slide, the zip line, the 80-foot bungee jump or a conventional choice, walking down the stairs.

These begat an array of other attractions for all ages and fitness levels. The brand for them all became RiverSports.

The 80-foot SkyTrail tower on order was a standard model ropes course and slide tower. In the architect’s sketches, it was reimagined with an angular “crown” to fit the Boathouse District’s signature architecture. To the right, the corkscrew slide is visible. One of four ways to descend, it is a high-speed, spiraling plummet.

The South Bank Tower of the SandRidge SkyZip cross-river trip is a landing zone and launch pad.

ROUNDING IT ALL OUT

The Velosolutions Pump Track offers smooth, seamless paved twists and turns for fancy moves and “big air.” More rugged is the Subaru Momentum Pump Track  a fiberglass mountain bike/BMX course with berms, bumps and jumps that lets riders use gravity and body weight to “pump” instead of pedaling the course. (Helmets and pads required).

The Cloud Bounce is a 48-ft. inflatable pillow. Fun!

Of course, it’s all a prelude to the cutting-edge whitewater course  introducing a host of new thrills and advantages that neatly outmaneuver other courses and in some ways, nature itself. 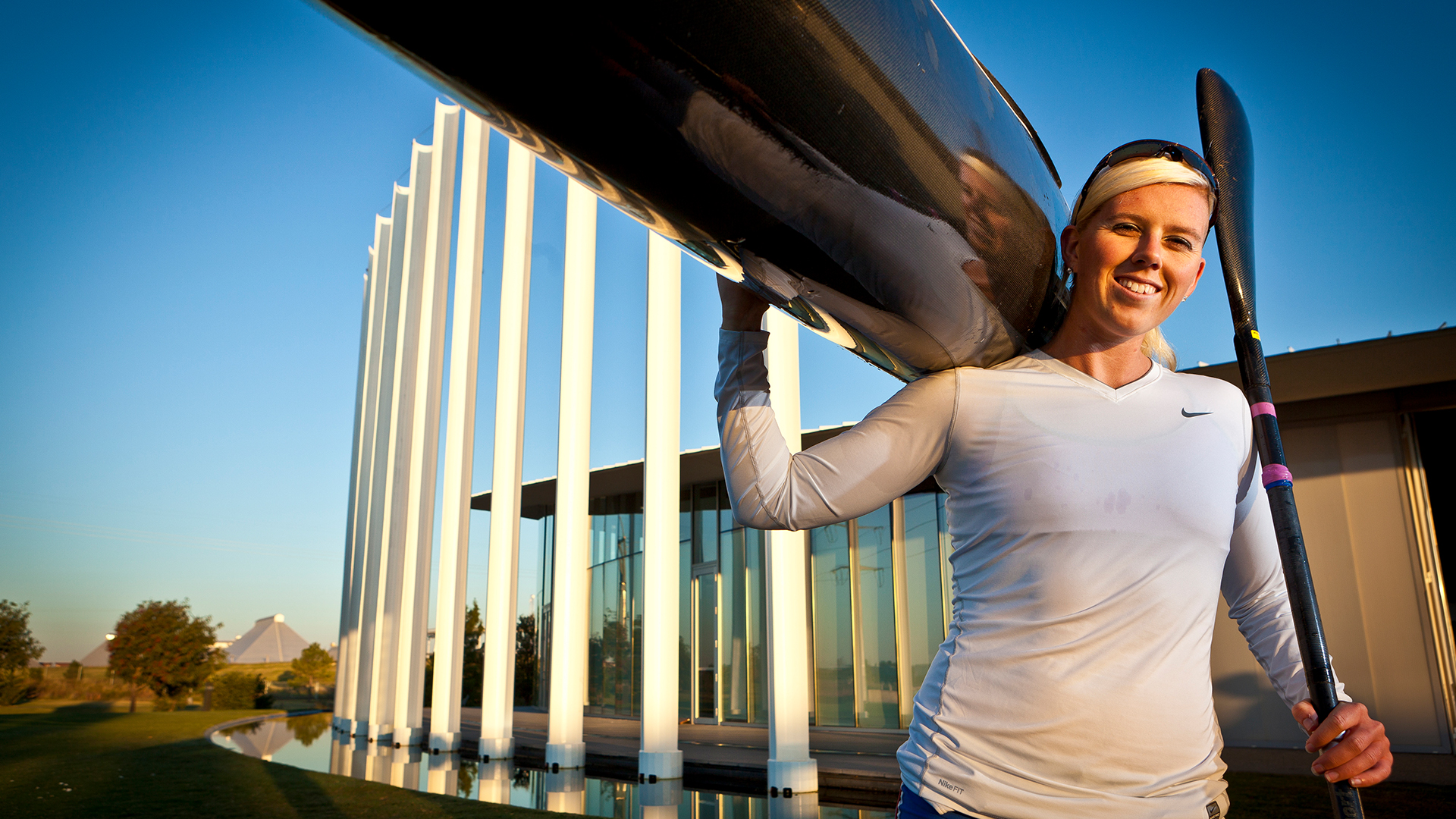