An oarsman at Lake Overholser in a traditional wooden boathouse, 10 miles west of the Boathouse District on the North Canadian River. It was the site of the Olympic Festival rowing events in 1989.

Mayor Ron Norick championed voter approval of the MAPS penny sales tax and in December 1993, voters approved it. An exciting lineup of amenities held bright promise  from a sports arena and ballpark to a new downtown library  and one titled River Restoration. Most of OKC had little frame of reference for the river, though. The attention and expectations were trained on other projects.

Before a shovel had been turned on MAPS river improvements, Lake Overholser and the North Canadian River (a short distance from downtown) had long since attracted a core of local rowing enthusiasts. Avid rowers and recent Oklahoma State University grads Mike and Tempe Knopp and others organized a club  the Oklahoma Association of Rowers (OAR). Their goal was to become as diverse and competitive as any team on the east or west coasts.

In April 1995, the world responded to the bombing of the Murrah Federal Building in downtown Oklahoma City with shock and an outpouring of compassion. The blast killed 168 innocent U.S. citizens and injured nearly 700 in the largest terrorist attack on American soil.

The attack united the community in immeasurable ways. And built the remarkable Oklahoma City National Memorial and Museum, dedicated in 2000. That unity brought even more energy to the MAPS movement.

In June 1999, construction began on the first of three low-water dams and river-lakes on a section of the North Canadian River. Locks were built on two dams to allow boaters access to the entire length of the river.

A May 2002 spillway test proved the hydraulic pistons raised and lowered the dam gates precisely as planned. Soon the waters were released to fill the basin and create 13 miles of immaculate new waterfront.

The rowing club was, of course, first to notice that MAPS was creating an ideal racecourse for rowers. (As current Mayor Mick Cornett likes to say jokingly, We did it by accident.) It was a perfectly straight, 2,000-meter stretch of water that begged to be rowed.

Construction of the 52-story Devon Tower wasnt a MAPS project, but it was part of the euphoria sprung from its momentum. Completed in 2012, it instantly defined the downtown skyline.

By 2001, completed MAPS projects were proving their transformative power. Expectations had been high ever since the first two to finish arrived: a picture-perfect ballpark, opened in 1998, and the mile-long Bricktown Canal. Both were greeted with cheers and relief. A certain euphoria had set in.

Completion of the seven-mile-long series of river lakes sparked excitement as the beauty of it began to emerge. Newly planted trees by the thousand and 13 miles of paved waterfront trails added to the picturesque appeal of this new expanse of water.

A bonus was the blank canvas the water created. Despite the location being so urban  adjacent to an increasingly vibrant inner city, gleaming skyline as backdrop  there was little to spoil the view or complicate the possibilities ahead. There was only this emerging swan of a waterfront.

The river corridor opened to the public in December 2004. Like the other MAPS projects, the $54 million pre-paid investment was a calculated inducement to private investment that also produced a wellspring of civic pride.

ON THE MAP: THE OKLAHOMA RIVER

For this seven-mile stretch, the North Canadian name was jettisoned at the behest of early river champion and prodigious ad man Ray Ackerman. Ray understood the power of a name and saw little value in one strapped to an inglorious past (and one so alien to its geography  being neither Canadian nor very far north). In May 2004, Oklahomas governor signed the new name into law, branding the upstart river for a big future.

Ad man and civic visionary Ray Ackerman, one of the earliest voices for bringing water back to the river.

The river has hosted the USA Rowing World Challenge  as part of OCUs annual fall Head of the Oklahoma event  since 2006.

A proper river needed a collegiate rowing team and for that matter, a regatta. Oklahoma City University stepped in, organized its first team and hired Mike Knopp as its rowing coach. (Knopp left his position as an attorney with the FAA to grab the opportunity, making his passion a full-time position.) Within a few years, Knopp would become Executive Director of the new Boathouse Foundation, and other coaches would be hired.

In October 2004, the first Head of the Oklahoma Regatta was hosted by Oklahoma City University. The event owes its name to Bostons Head of the Charles, organized by the Cambridge Boat Club on the Charles River in 1965.

Knopp admits it was a challenge to recruit clubs that first year, but it worked. It was well attended by rowers from Harvard and Princeton  places steeped in centuries-old rowing traditions. Whats more, they returned home thoroughly impressed.

It was the first of a series of competitive events that would establish the venue on the world rowing circuit. The event also drew a throng of locals who were already proud of their new river. Community rowing programs  complete with corporate, collegiate and youth teams surging onto the water  came as a surprise.

By 2006, the Head of the Oklahoma Centennial Regatta attracted traditional rowing powers Harvard and the Naval Academy. In subsequent years, it has drawn from many other American teams (early here were California-Berkeley, Stanford, Texas and Iowa) as well as dozens of international teams.

Energy industry momentum had its leaders on high alert for ways to enhance the citys quality of life, the better to recruit and retain the best and brightest, and thus compete successfully against megacities.

Meanwhile, Mike Knopp was leading a grassroots effort to build not only a rowing program on the emerging river, but a boathouse on its banks. Another rowing enthusiast, Chesapeake Energy officer and friend of the Knopps, Martha Burger, brought the rowing initiative to the Chesapeake Energy CEO's attention. She knew that whatever the idea, it had to measure up to the opportunity before them. Thats when energy CEO Aubrey McClendon entered the picture.

Knopp made a presentation to McClendon and his small cadre of trusted collaborators. The pitch was to raise $300,000 to build a modest boathouse. Knopp even brought a model of it.

McClendon understood the rivers potential  no small amount of which rested in its power to reform his hometowns image. Given broad, age-old misconceptions about the city, the sight of the pristine river alone was enough to trigger a double-take. Add rowers gliding across its serene surface, and the dusty prairie paradigm could be rocked on its heels. Add show-stopping architectural excellence to the scene and you had yourself a headline.

Regarding the dusty prairie: The Dust Bowl occurred in several states. And in Oklahoma, it was systematically drowned in lakes created across the state in the 1940s-60s. Ironically, just as the Army Corps of Engineers was putting downtown OKCs river down for a nap, the Corps built so many Oklahoma lakes that a 1970 Time magazine cover feature declared it an aquatic paradise.

So, if it was rowing OKC would embrace with this exciting new asset, McClendon and other civic leaders reasoned, why not send a message to the international sport that a bold new, world-class venue was out to supercharge its future? What time-honored, ultra-traditional Olympic sport wouldnt welcome that?

McClendon and fellow philanthropists also knew that with so much new riverfront land to build on, it was vital that the first structure set a high standard. But before committing funds, he wryly warned Knopp that once he gets involved, I have opinions 

His opinions, and investment  as well as those of private donors  were more than welcome. As was a prodigious passion for taking the rivers potential  that empty canvas  and filling it to the brim with excellence and achievement.

On the spot, he turned to Rand Elliott, his architect of 15 years, with the challenge of producing a landmark. 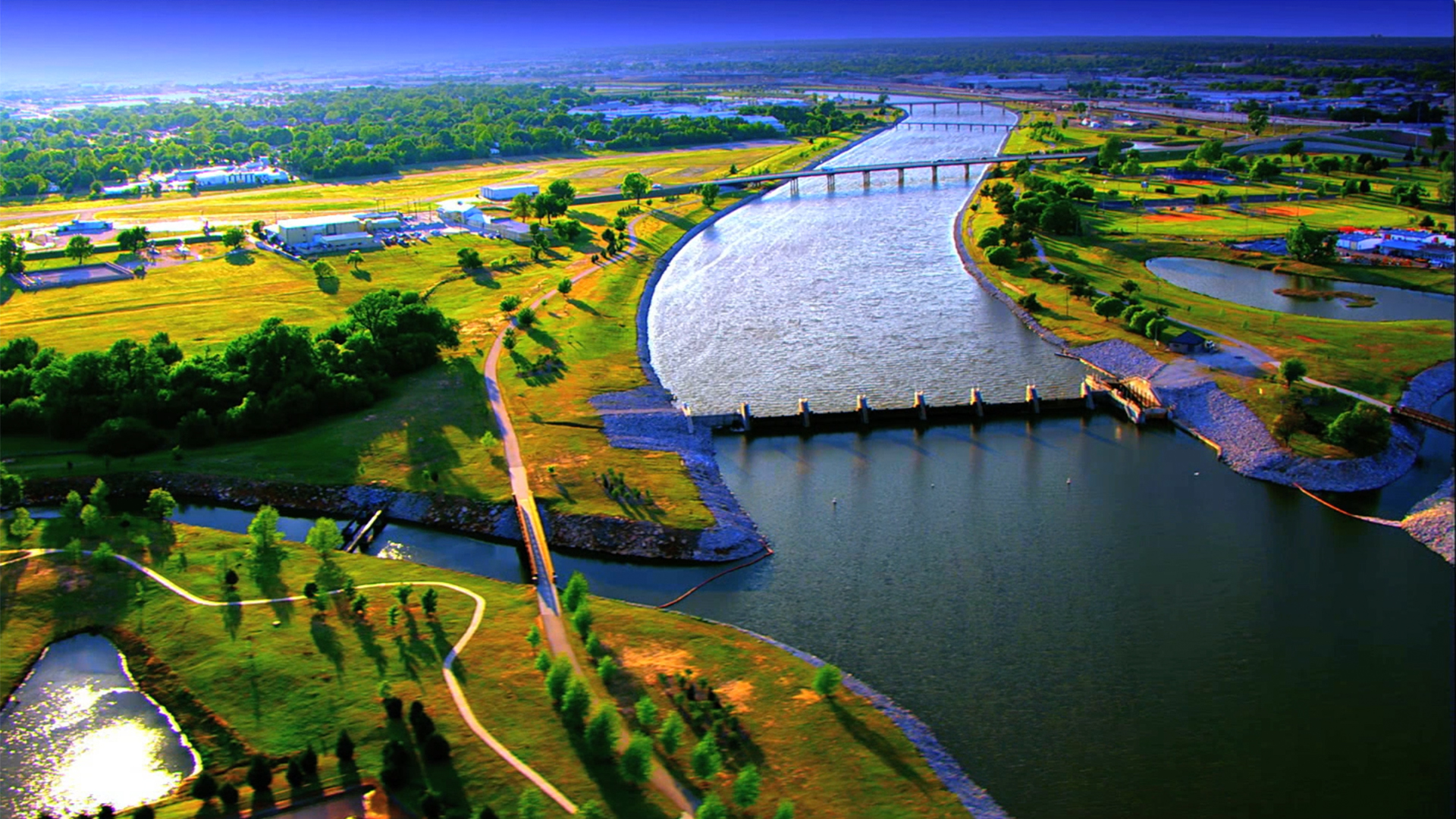