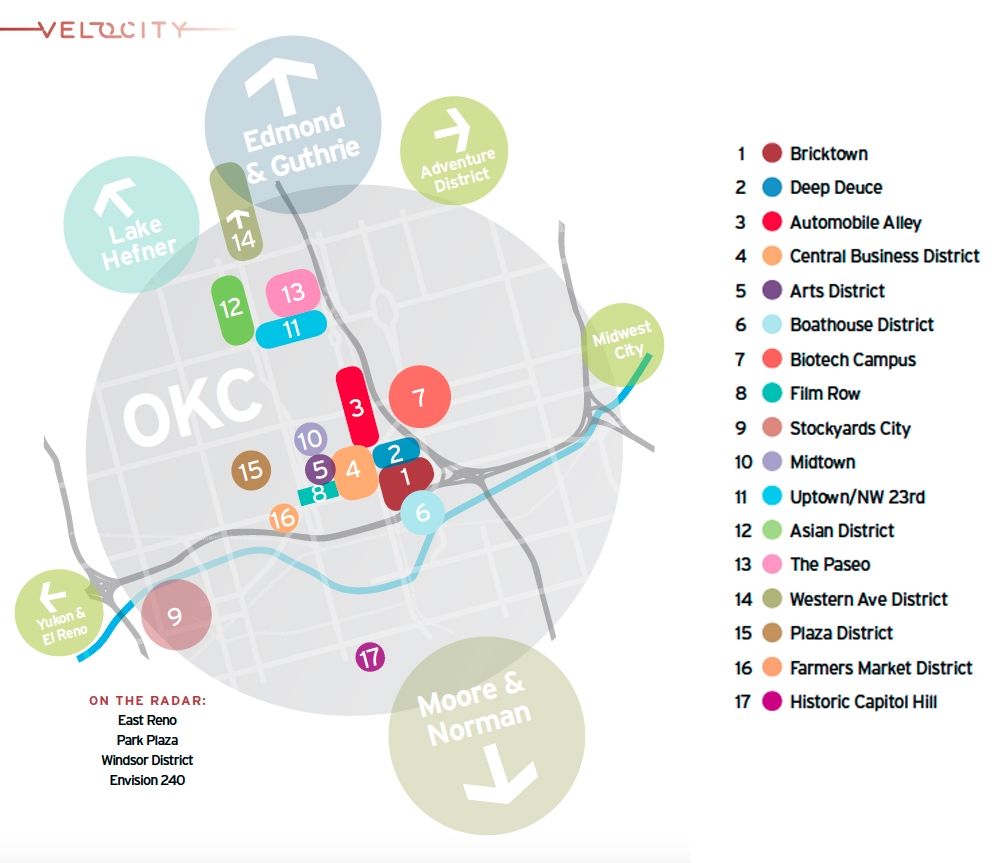 Each district in this surging urban core has its own personality and appeal, and more keep coming. Together, they welcome one and all to a dazzling city.

Countless other corners of OKC are being revived and reclaimed, as exciting new districts percolate. But since this story is devoted to a booming food scene, let’s visit a district defined by OKC’s first farmer’s market: HISTORIC FARMERS PUBLIC MARKET, circa 1928. 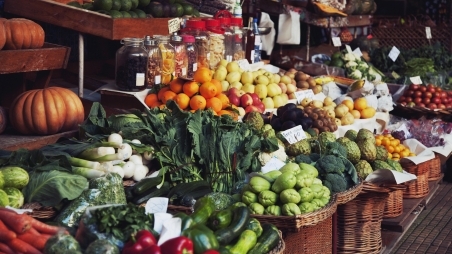 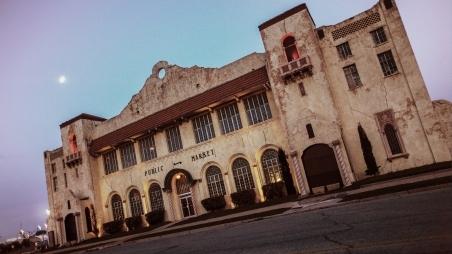 Veteran produce and plant purveyors here  and a bustling antiques market  have inspired newcomers who fit the earthy ethos. Also fueling interest is the newly rebuilt I-40, which now routes traffic along Western Avenue  the district’s eastern boundary.

The district’s centerpiece is a grand example of the Colonial Spanish architecture you might expect to see in San Antonio. Inside and huddled ‘round are remnants of the food hub that has served farmers, ranchers, grocers and consumers for 90 years.

Today it is home to THE ANTIQUES MALL, a consortium of more than a dozen independent, owner-operated shops. Weekends, it also hosts producers offering anything from fruit, flowers and preserves to candles and alpaca wool. 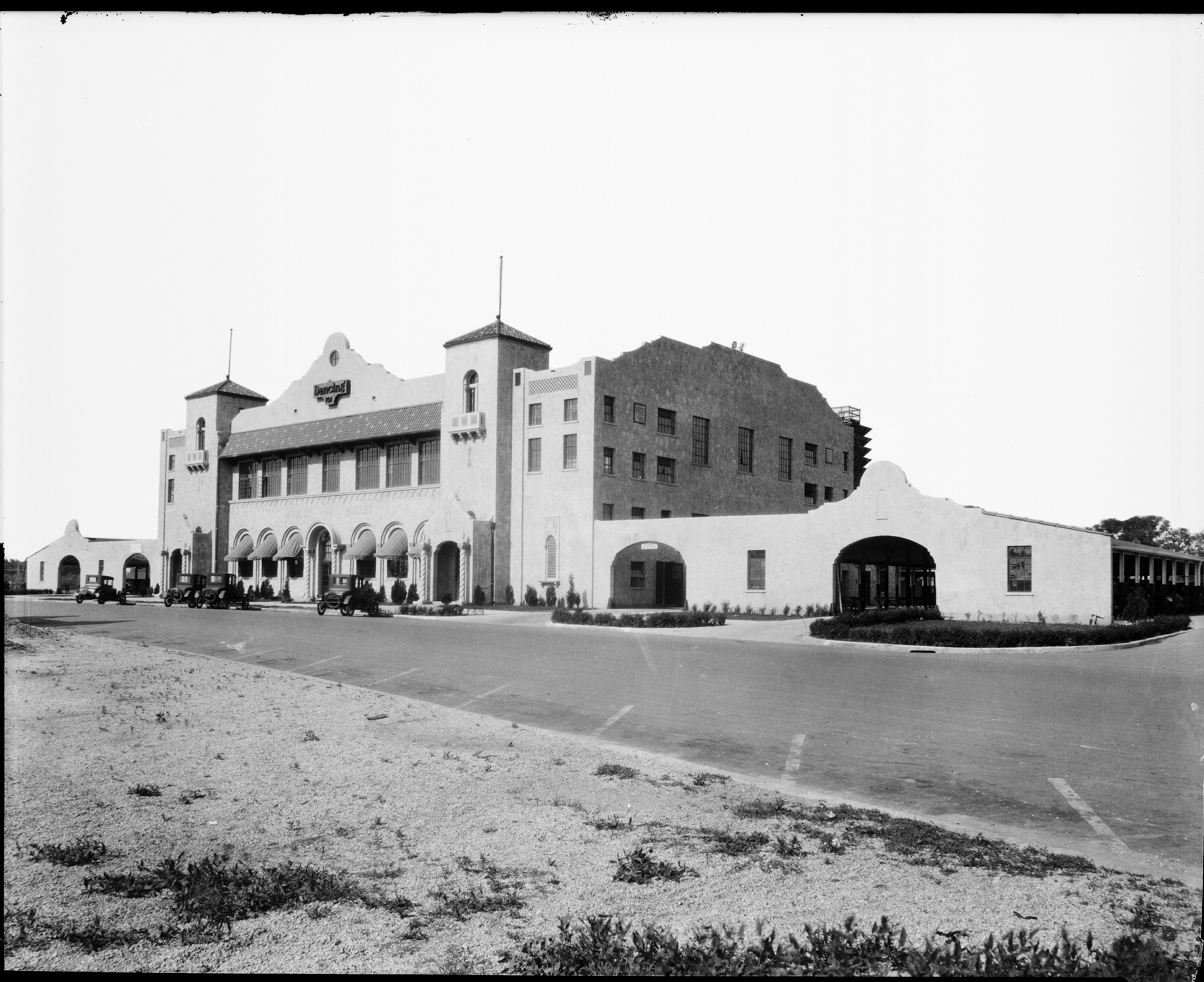 Longtime tenants include PAM’S PLANTS AND PRODUCE and Cristobal’s fresh produce at THE PIÑATA STORE.

And a new generation has arrived with enterprises sprung from the areas rustic roots. URBAN AGRARIAN was early on the scene with fresh local food from upwards of 30 farms, ranches, dairies and bakeries.

In the building that first supplied power to the area, THE POWER HOUSE BAR is now a cool speakeasy and patio hangout with food, music and outdoor games. 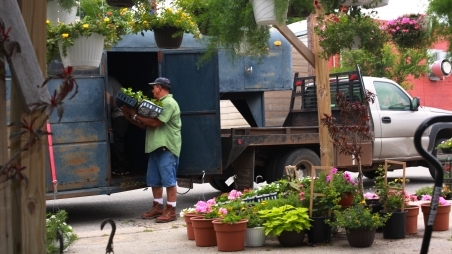 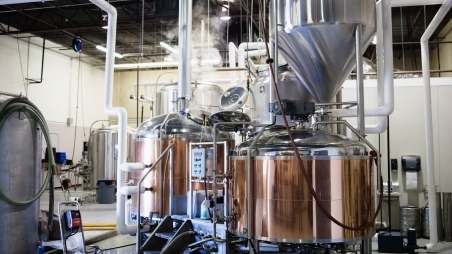 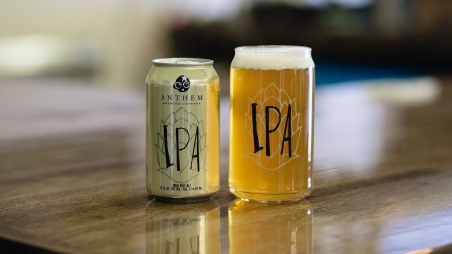 The district has a romantic air, and it’s already a dynamic mix. A healthy events calendar includes concerts and movie nights. Plus, autumn brings fresh-roasted peanuts that roll in by the bushel, and truckloads of pumpkins.

Keep an eye on this blooming district at OKCfarmersmarket.com.

Plaza District: Unique Eats in the Heart of OKC 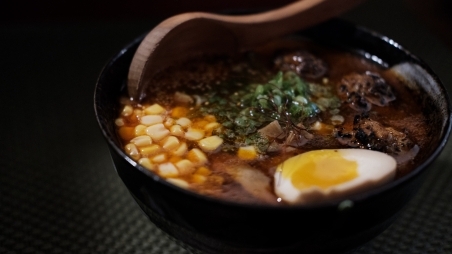 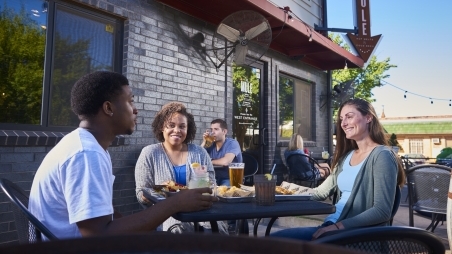 Just a quick turn onto Northwest 16th Street, you’ll find yourself in the throng of a fun and funky strip of businesses that define what it means to shop  and eat  like a local. Congratulations, you’ve just found your new obsession: The Plaza District.

Finding delicious eats is a breeze on the Plaza. Barely a block into the district on the east side, you have a choice between two very distinct culinary concepts: THE MULE and GORŌ RAMEN. East meets west eats in these two restaurant neighbors.

GORŌ RAMEN will be your go-to eatery up for ramen and Japanese inspired dishes. But this isn’t your college microwave type of ramen. The ramen created by Chef Jeff Chanchaleune was inspired by his first sip of warm chicken broth at a Kyoto train station in Japan.

After honing his ramen making chops, Chef Chanchaleune decided to chase other flavors inspired by his travels overseas. Stand out on this killer menu include the house ramen, tori paitan, nikuman (steamed rice buns with powerhouse fillings), and the black sesame ice cream.

If you’re looking for food, drinks and atmosphere that packs a punch, you’d be remiss to not check out THE MULE. Brainchild of HungryTown dining group, this quintessentially American eatery delivers on the promise of full stomachs and happy hearts.

The trademark kicker of The Mule is all of their takes on grilled cheese sandwiches. Their cheesy, bready comfort options include all the down home comfort food you could ever dream of. Must eat options at The Mule include poutine, a classic Canadian confection of French fries, cheese curds and gravy, as well as any of their delightfully cheesy “sammies” on the menu. 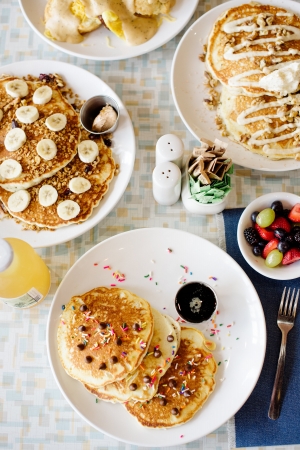 In fact, the devastatingly cheesy menu items got The Mule on the map on the Food Network’s “50 Best Cheesy Dishes by State” list for the cornbread mac ‘n’ cheese grilled cheese. Come hungry.

No cute neighborhood is complete without a selfie-worthy breakfast and brunch joint. Enter AURORA. This quaint breakfast, brunch and lunch place highlights some of the best parts of Oklahoma City’s foodie scene. Chef Henry Boudreaux, like other prominent chefs in the area, sources only fresh, local ingredients. You see Chef Boudreaux’s attention to detail on everything Aurora delivers to your table.

From the Crème Brule-inspired roasted grapefruit, to seasonal cinnamon rolls and more types of pancakes than you can count, kids and adults can come hungry and leave satisfied. Savory breakfast fans never fear, several types of egg benedict and omelets wait for you to try. Add that back patio, oodles of different flavors of mimosas and coffee drinks  you have the makings for a fine Sunday afternoon.

After bursting on the scene in 2013, EMPIRE SLICE HOUSE is a staple of the Plaza District. With colorful walls plastered in pictures of bands, movies and pop culture icons, it’s hard to miss this pizzeria  especially with the pink elephant statue out front. Brainchild of Chef Avery Cannon and veteran restaurateur Rachel Cope, this joint became a district-wide favorite with their fluffy New York-style crust with all its funky toppings. 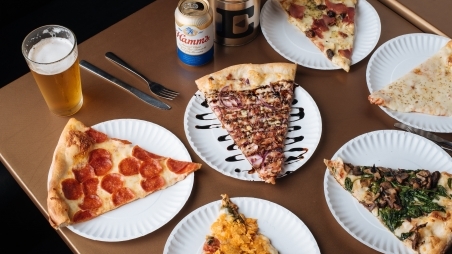 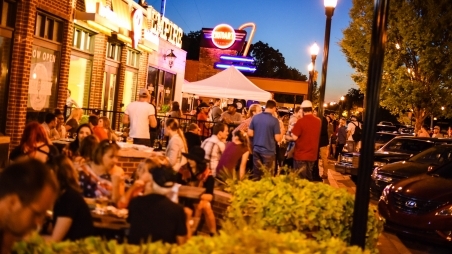 This fresh dining concept serves pizza by the pie and by the slice, with a rotating slice list daily. From the BBQ chips on the “Ghostface Killah” slice, to the figs on the “Figgy Stardust,” Empire Slice House’s ever-changing slice list will be sure to delight even the pickiest of eaters. Don’t forget to ask the bartender what drinks will pair well with your slices.

But Gorō Ramen, The Mule, Aurora, and Empire Slice House are just a small fraction of all the restaurants and bars in the plaza. And if you want to be “in the know” of the hottest foodie trends and hipster haunts, head to the Plaza District. You won’t be disappointed. 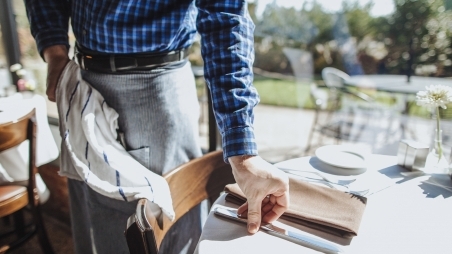 The seeds of OKC’s current urban restaurant boom may well have been sown in 2000, when the first of OKC’s famous MAPS projects began to bear fruit. And when Keith and Heather Paul bought the former Cheever’s Flowers.

Soon the longtime family florist opened as CHEEVER’S CAFÉ  an upscale gem with appropriately enough, a flower atop each table. Cheever’s became  and remains  a fixture on most rankings of the city’s best restaurants.

CHEEVER’S was the first of A Good Egg Dining’s now eight-restaurant “Eat Local” juggernaut. OKC can “eat local” at a different restaurant each week, thanks to A Good Egg Dining’s good work. Co-founders Keith and Heather Paul find their greatest satisfaction in providing jobs for 400 people and seeing them grow. 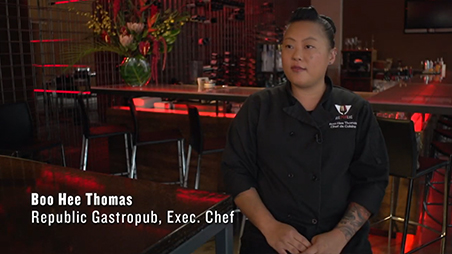 Boo Hee, a born-and-raised Oklahoman, is a rising star at A Good Egg Dining group. She began at RED Prime on kitchen prep but soon gained executive chef status at Kitchen No. 324 and today is the chef de cuisine at Cheever’s.

A cherished Cheever’s neighbor is PASEO GRILL, drawing fans from the far corners of the metro. Opened in 2006, its success has fed the resurgence of the Paseo Arts District, with busy galleries, shops and eateries. 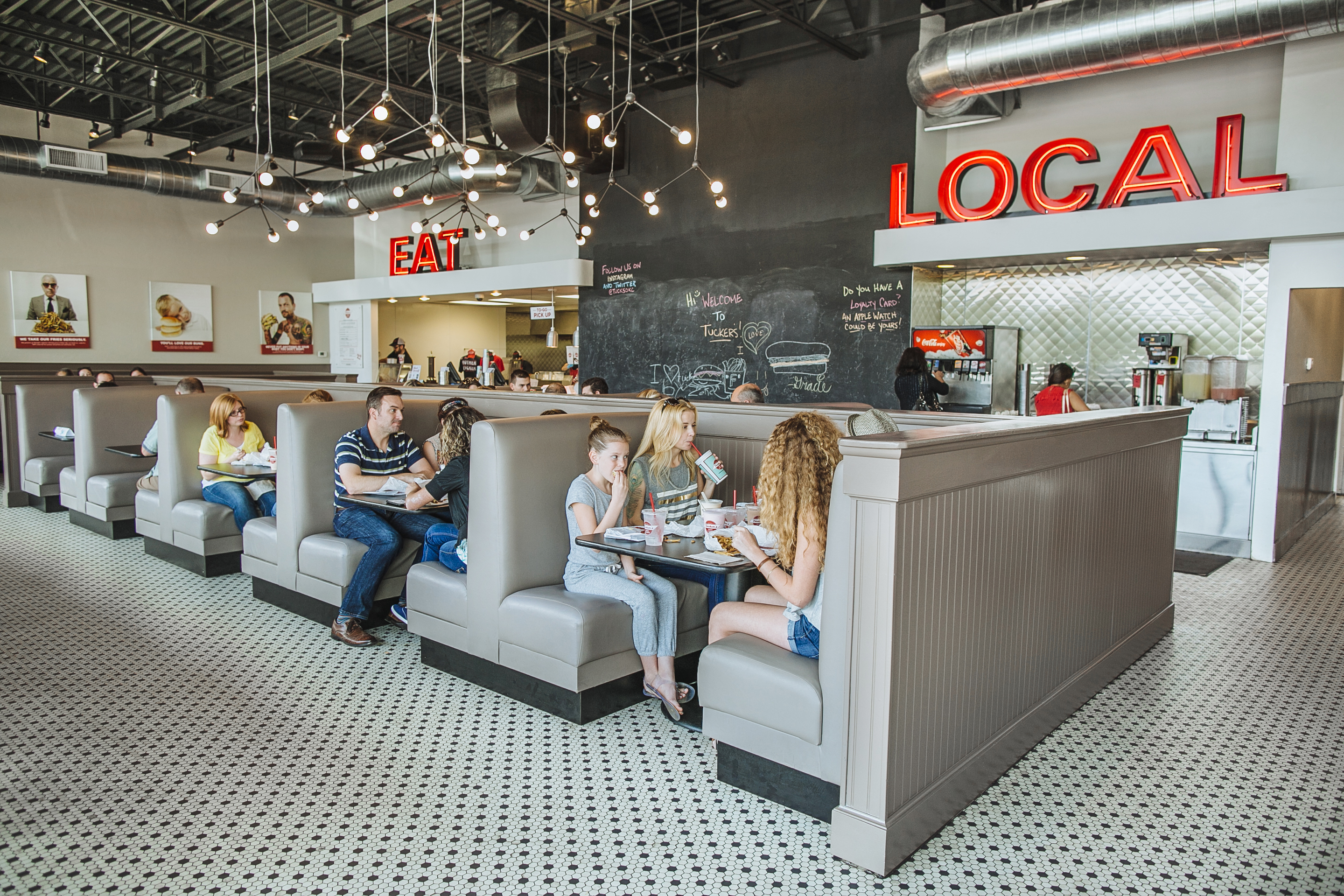