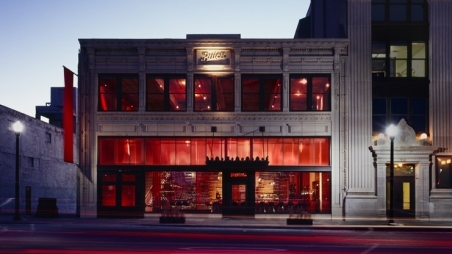 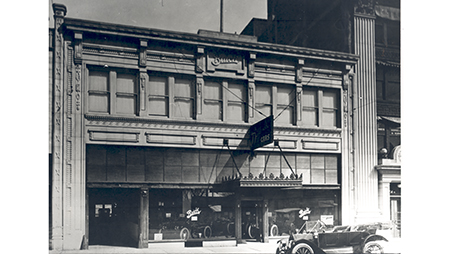 Oklahoma is famous for steak. But dry-aged prime downtown was new in 2007, when RED PRIME broke the steakhouse mold. Set in the landmark limestone 1911 Buick building, RED was early to capture the theater of dining, with high ceilings and its iconic “red wind” design. Importantly, the food was as exciting as the setting. Distinctive crusts and sauces, plus a trove of Southern indulgences, heralded a new, must-do magnet. MSN.com promptly put it on its nation’s Top Ten Steak Restaurants list, and new kudos keep coming. RED menus since have introduced a profusion of deep flavors. Try Lobster Crusted Seabass or any of their steaks cooked to perfection.

In 2014, a second steakhouse star arrived on Historic Automobile Alley, just blocks north of RED. Under a blue neon sign in the 1925 Buick building, year-old BROADWAY 10 CHOPHOUSE offers a glamorous setting that hits on all cylinders: high energy, luxe looks and fabulous food. Chef Arturo Bautista rounds out the wood-fired chophouse model with seafood, sushi and a penchant for invention with bacon (glazed bacon as a bar snack and a flourless chocolate cake with salted caramel gelato and rum-coffee glazed bacon as a dessert, to name a few of his creations). 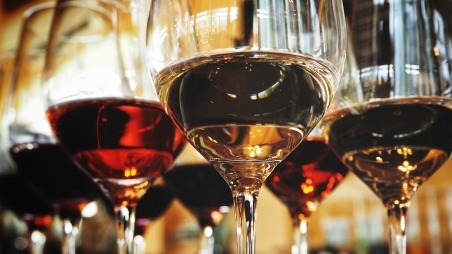 And Broadway 10’s hip little offspring, SIDECAR, is a cozy neighborhood bar. An instant hit, it was a sign of the impact owners Aaron Soward and Jeff Dixon have on this immediate area. A third project is underway next door.

A class act in the classic camp is MICKEY MANTLE’S STEAKHOUSE in Bricktown, across the street from the ballpark’s statue of the superstar slugger. (Event the street is named for the revered native son.) A homerun from day one.

Restaurateurs Pete Halloway and wife/master baker Sheree have deep roots in Edmond, where BOULEVARD STEAKHOUSE (1998) has a lock on a long list of loyals. Although far from the urban core, its pre-renaissance success spoke volumes about OKC’s appetite for prime steak, executed to perfection. 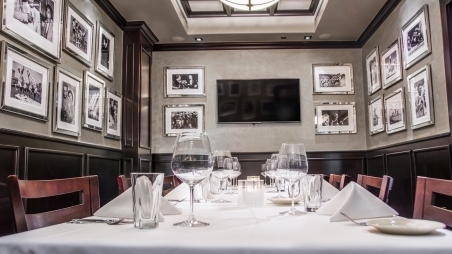 Demand for prime downtown now has the elegant MAHOGANY PRIME STEAKHOUSE at a prime downtown street corner. Tables with streetscape views add a twist to Mahogany’s classic dark-wood steakhouse tradition. And if you’re dining post-Thunder game, you may be sharing the restaurant with the team.

Of course, great steak in Oklahoma has its roots in the Stockyard City, and that’s one reason why MCCLINTOCK SALOON & CHOP HOUSE opened in this historic area of OKC. Paying tribute to time honored traditions of raising cattle and preparing quality home cooking, McClintock is flourishing. 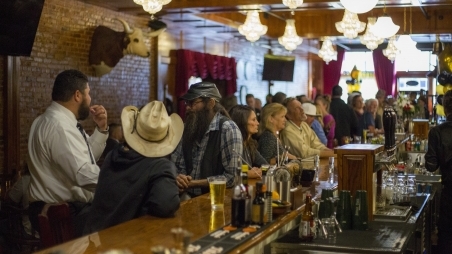 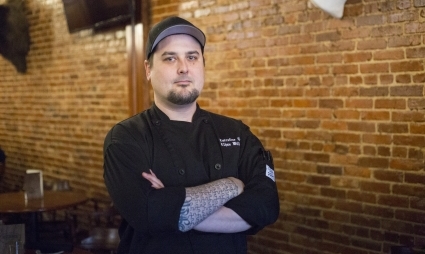 I want to put McClintock on the map as a go-to spot for delicious, consistent food, said Chef Ethan Williams.

Chef Ethan Williams turned his sights to cooking after trying to finance his original passion of architecture through a line cooking job at a BBQ stand. He was hooked and rose through the ranks to attend culinary school in Boulder, Colorado. 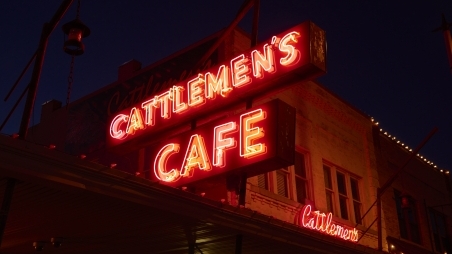 BUT EVERY OKC restaurant owes a tip of the ten-gallon hat to the granddaddy of them all, a revered institution for 105 years. CATTLEMENS STEAKHOUSE  the oldest continually operating restaurant in Oklahoma City  first opened its doors to hungry cowboys and ranchers in 1910. Since that time, the restaurant has played host to all manner of colorful clientele  from outlaws to celebrities and everything in between.

But beyond being known for its unique history, CATTLEMENS is also respected for its terrific food. The restaurant still caters to the districts operational cattle auction, opening at 6 a.m. daily to serve breakfast to the hardworking cattle haulers hailing to Stockyards City to pick up their next load. It is lunch and dinner where the cuisine shines, however. Cattlemens perfectly aged steaks have garnered international attention, with the restaurant being among MSNs best 50 steakhouses in 2015 (alongside aforementioned RED Prime) and being featured on Diners, Drive-ins and Dives and Man vs. Food. 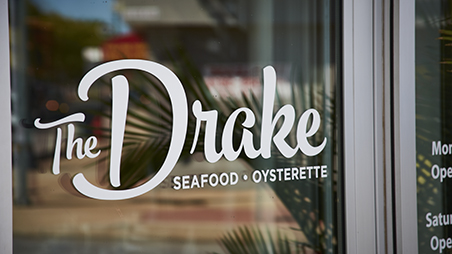 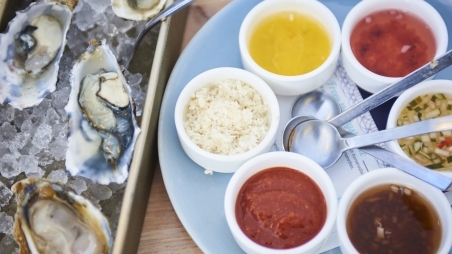 Fresh oyster platter at The Drake

THE DRAKE SEAFOOD & OYSTERETTE’S prominent Uptown corner proclaims its presence just a block west of the place where it all began with A Good Egg Dining group. This hip starlet is a shining example of finding and filling gaps in OKC’s urban restaurant landscape, ambitiously drawing on waters from the Pacific Northwest, Southern California, the Gulf Coast and Southeast Coastal Region. The ambiance is Oceanside chic; The Oysterette is pure icy raw bar adventure, served with a palette of slurpable dipping sauces.

All the while, PEARL’S OYSTER BAR has gamely satisfied seafood lovers here for nearly a generation. Across from Classen Curve in Belle Isle, it combines Creole spirit and spice with a host of other regional influences. And while sushi isn’t new to OKC, we’ve seen a boomlet of urbane sushi bars citywide. Pass the wasabi. 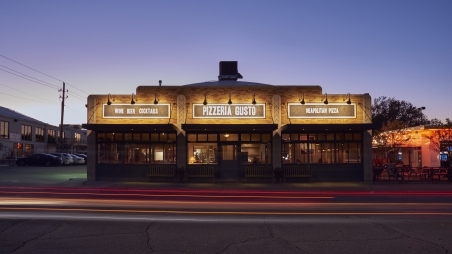 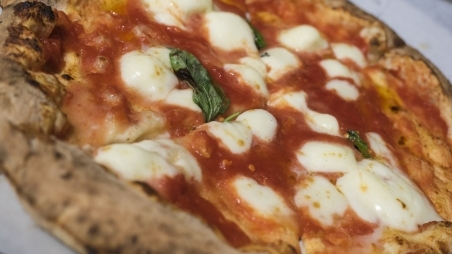 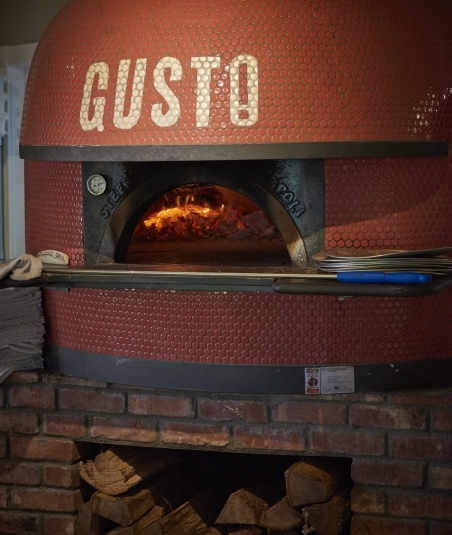 True Neapolitan pizza is in a league of its own. The crust is impossibly soft, elastic, fragrant and tender. One key is the made-in-Naples oven that heats to upwards of 700 degrees.

Opening THE COACH HOUSE in 1984 and later selling it to the chef who made it sublime (Fleischfresser) is legacy enough. But Chris and LaVeryl Lower’s METRO WINE BAR & BISTRO, opened a decade later, is another treasure. An early, unwavering source of seasonal menus and culinary excellence earning a well-deserved OpenTable Diner’s Choice award in 2018.

Lower continued to make other lasting additions to the dining scene, partnered with the dynamic Chef Kathryn Mathis on ventures like BIG TRUCK TACOS. Top-notch fresh-Mex and sass (“Saving the world, one taco at a time”) made it a darling of Diners, Drive-ins and Dives, and put Uptown on the map.

True Neapolitan pizza is in a league of its own. The crust is impossibly soft, elastic, fragrant and tender. One key mastered by PIZZERIA GUSTO, the latest salvo of Chris and LaVeryl Lower, is the hand-built Stefano Ferrara stone oven that heats to upwards of 700 degrees. Combined with the flour, tomatoes and other must-haves flown in from Naples results in Neapolitan heaven. 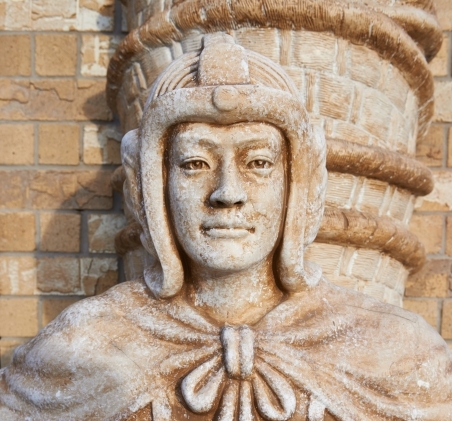 A wealth of restaurants in Uptown’s neighboring ASIAN DISTRICT is the pride of a very large, diverse Asian population. Among the first to open were the Vietnamese Lido (early ‘80s) and Chinese Dot Wo (1989), and today dozens offer all variations on Eastern cuisine.

Prominent in midtown is the newest hip Asian fusion, quick dining concept GOGI GO. Created by a partnership of Chefs Kevin Lee, John Lee and Jason Chang, this joint  described as “Chipotle for Korean BBQ”  is the newest in quick dining Asian food that OKC dwellers are craving.

For aspiring chefs who want to create Asian dishes at home, SUPER CAO NGUYEN is a must-go. Established by Vietnamese immigrants Tri and Kim Luong, this decades-old institution delivers on unique imports and tastes you can’t get anywhere else. 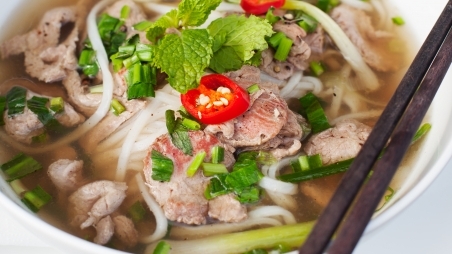 No visit to the Asian District is complete without swinging by a bobatea, or bubble tea café. These delicious sweet Taiwanese tea drinks are so named because the distinct tapioca balls, or bōbà, at the bottom of the drink.

Chef Nguyen grew up in OKC, a child of Vietnamese refugees. Showing his French-tinged Vietnamese roots, his formative first restaurant job was at OKC’s trés French LA BAGUETTE. After finding his passion in Alain’s kitchen, he enrolled in The Coach House Apprenticeship Program and got busy opening restaurants in short order. 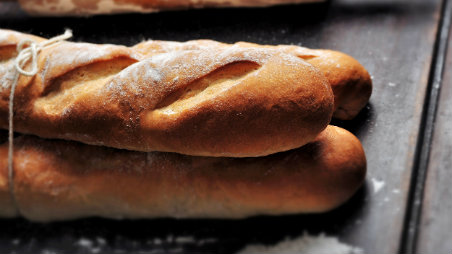 Chef Alain Buthion and his brother, Michel, brought authentic French cuisine to OKC in the early ‘80s. The pair hails from the south of France, where their father Jean owned his own boucherie (butcher shop) and mother was a culinary whiz. Their LA BAGUETTE BISTRO is a celebrated staple, blessed with an adjoining French bakery-fromagerie-charcuterie.

Like Fleischfresser, Buthion has trained and/or inspired countless cooks in OKC (like Vuong Nguyen). Michel meanwhile has carefully trained wait staff on superlative service. Their creation is an influential institution with a contagious joie de vivre.

REPUBLIC GASTROPUB at Classen Curve pairs sophisticated American fare with a battery of beers and other imbibables in a knockout setting. This supermodern hub of a pub is an immersion in entertainment (36 TVs include three 100-inch monsters) and a luminous “beer wall” awash in in amber waves of ale.

In Midtown, the handsome, German-inspired FASSLER HALL specializes in sausages, a bar with a great weekend brunch and a colossal skyline view. 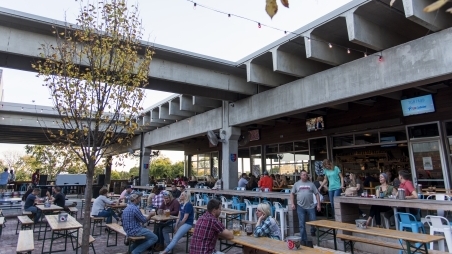 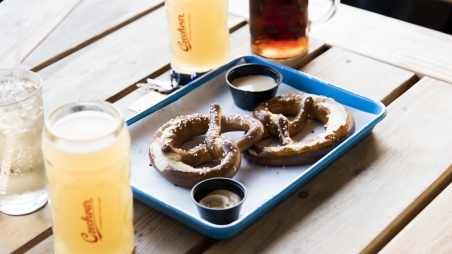 If you’re in the mood to head to funky art-driven community at the Plaza, you’ll be able to experience a serious wine bar with some major chops. THE PRITCHARD is a neighborhood wine bar restaurant featuring small plates, seasonal offerings, and locally sourced meats and cheeses. This local eatery, under the charge of Executive Chef Shelby Sieg, and General Manager Mindy Magers, is definitely worth the visit on your next visit to 16th street. Oh, did we forget to mention their weekend brunch too? Now you definitely have to check it out. 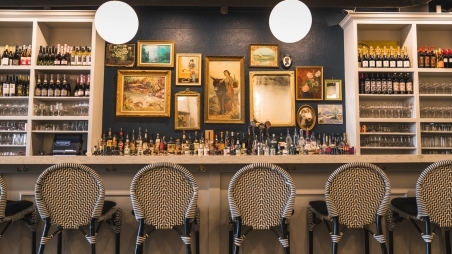 JUNIOR’S has been the very picture of swank since 1973. It’s a valentine of a shrine to steak, lobster and Caesar  all dark wood, etched glass and flocked wallpaper.

Enter R&J LOUNGE & SUPPER CLUB a throwback to the nostalgia-rich ‘50s and ‘60s. The brainchild of Ludivine chef Russ Johnson, it’s the polar opposite of farm-to-fork. Yet this carefully designed experience works so well, The New York Times quickly dispatched a reporter to OKC. See the glowing review, from page two of the well-read Sunday Travel section.

The arrival of a second CAFÉ 501  at Classen Curve  was cause for celebration. Pete and Sheree Holloway’s European-inspired original in Edmond opened in 1995  where great skill has always gone into the oven and onto the plate.

Greetings at this sleek space include a bakery case of perfect pastries and artisan breads. The exhibition kitchen, the stone oven  all point to serious fare. The bar’s enigmatic airborne ellipse adds drama after dark. 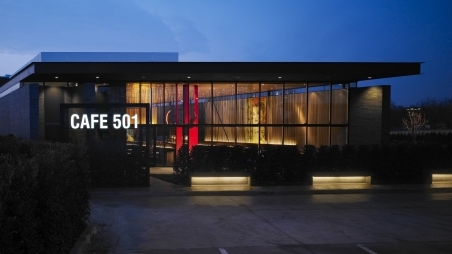 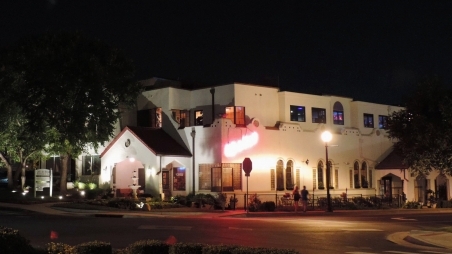 No restaurant better reflects OKC’s urban renaissance  and growing “Food City” status  than does Midtown’s CAFÉ DO BRASIL. Chef/owner Ana Davis arrived an immigrant and bet big on an area that was a decade away from today’s vibrant reality.  Ever since, her cooking and her warm presence have added to the area’s effervescence. 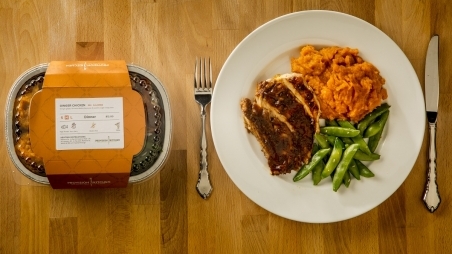 The PROVISION KITCHEN logo announces its farm-to-fork mission in an illustration: fork tines sprouting from a carrot (or is that a parsnip?). This brand’s local, fresh, healthy chef-prepared meals has seen a joyous reception. The seasoned chef is Scott Bartel. And the source? PROVISION ORGANIC FARM nearby grows most ingredients. Owner Whitney McClendon’s commitment to healthy food stems from her background in science and epidemiology. It’s about disease prevention. 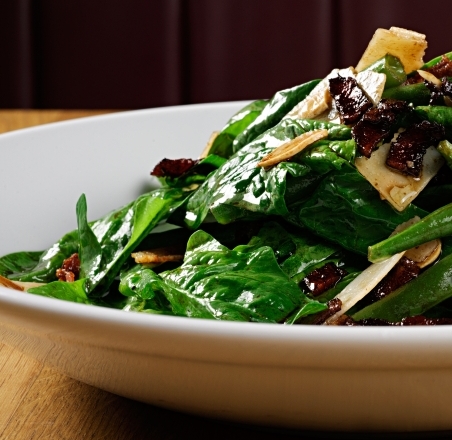 Having earned Bachelor of Science degrees in biology and chemistry and a Master of Public Health in epidemiology and biostatistics from the University of Texas Southwestern Medical Center in Dallas, McClendon served as research manager of epidemiology at MD Anderson Cancer Center from 2010 to 2012 and then was named director of Texas Cancer Research Biobank at the Baylor College of Medicine’s Human Genome Sequencing Center. But the idea of doing something to impact Oklahoma City in a fundamental way is putting her expertise to unexpected but very productive, community-enhancing use.

Those who know NOURISHED FOOD BAR are obsessed with its super-fresh, organic and imaginative soups, salads and sweets. Well-informed ways with veggies, nuts, grains and legumes add up to sound nutrition. From a farm-to-fork-principled couple with the health of people and the planet in mind. 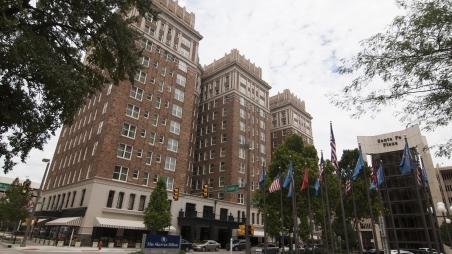 Another top-notch, park-centric restaurant downtown, PARK AVENUE GRILL, presides in a grande dame of historic hotels, the celebrated 1911 Skirvin (now Skirvin Hilton). Local, seasonal and Southern make this a must-do. Don’t miss the tile and other remnants of the 1930 Skirvin Coffee Shop. 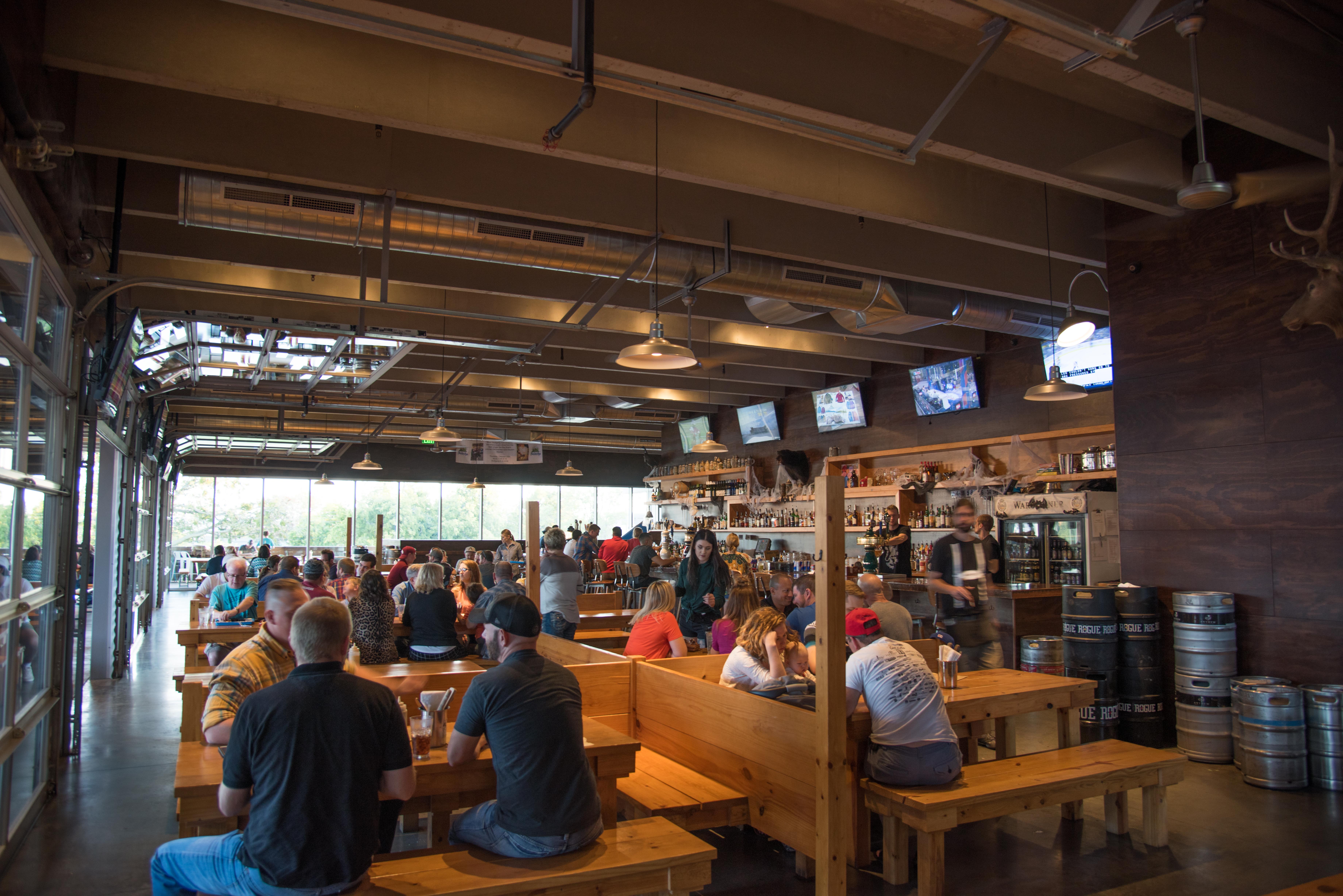