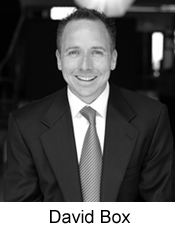 As is the case in so many new businesses, Box Talent Agency's origins were the result of recognizing and filling a need. For David Box, the highly successful Box Talent Agency sprang to life 20 years ago when, as a college student, he organized and publicized an evening of entertainment to ring in the New Year. In 1986, David began as a one-man show booking bands and making calls.

Today, his team consists of more than 100 employees and his company has set the standard for the entertainment industry in Oklahoma by doing agent or promotional work for such internationally-recognized acts as Toby Keith, The Black Crowes, Dr. Dre, Everclear, Dave Matthews Band, Dixie Chicks, Goo Goo Dolls, David Allen Coe, Better than Ezra, Dream, Robert Earl Keen, and Rick Springfield just to name a few.

David has served as a music expert witness for the State of Oklahoma, is a feature speaker at many universities, and served on a New York-based music panel. David was one of the first members of the Bricktown Association and has actively been involved in the redevelopment of Campus Corner in Norman. Along with band promotion, he also has owned clubs in the metro area including: Rome, Pyramid, Rome 90, Shark Club, Bricktown Amphitheater, Quazimoto's, Red Room, Will Rogers Theater, and Eureka 307.

What makes the OKC area a good place to start and grow a business?

When I started my business 20 years ago I always had the feeling that people were cheering for me to succeed. I believe the culture of Oklahoma City is the same today and with the low cost of doing business here, people are prone to give you a chance. There was no 'grand business model', just a lot of persistence and sweat. In the beginning, people seemed to want you to succeed.

The culture of Oklahoma City is like that today. Our company has gone from one office with business in Norman to a statewide presence. Prior to Oklahoma's renaissance (and earlier in my career) it was tough to sell employees and bands on our state, but that changed when Norman's Campus Corner and Downtown Oklahoma City revitalized.

When the self-esteem of a community is strong, people like to have parties to celebrate their successes. I think it feeds off itself. Box Talent does business in almost every state, but the people of Oklahoma are always the best to work with, treat us fair, and have a great time.

I can honestly say the business climate in this state and City is a product of the people. In our 20 years we haven't had any major legal, regulatory or government issues, a remarkable feat for a service business such as ours. It must be the values here. The culture of hard work and honesty permeates.

Where did the idea for your business originate?

I simply didn't want the great time I was having at college to end. That statement is part in jest and part true.

To single out one event, there was a New Year's Eve that I was surprised that nothing was going on where people could gather and have fun bringing in the New Year. So, I hired a band, rented a room at the Holiday Inn, and provided refreshments. The next six days I called everyone I knew, asked the people I had called to call people, and passed around hundreds of flyers. We were expecting about 300 people and to our surprise 1,000 showed up! At $10 per person we made around $5,000 and that is how my business began.

As a college student with a pocket full of cash it was hard to imagine that my desire to find a New Year's Eve party to attend would result in what I now have done professionally the last 20 years. I basically work while other people enjoy themselves, but it's hard to call it work because I love it so much.

From that first party to the present, Box Talent has evolved and changed. We started by managing the same band that played our first party with 15 employees to today where we manage 100 bands in three Oklahoma offices. We've produced concerts for everyone from Creed to Toby Keith to the Doobie Brothers. There have been thousands of weddings, proms, backyard parties, and numerous other functions. In the entertainment business it is important to constantly re-invent yourself and continue to act like a start up. That is what we've done and I believe that is one of many reasons of why we've been so successful.

How did you initially finance your company?

I took the $5,000 from the New Year's Eve party and my father gave me $10,000 and said, "good luck!" I thought that was kind of strange, but I had graduated college and I just assumed that was a way to get me out of the nest. I realized it was not without strings when he followed up his "good luck," with "I also want your car back."

How have you grown your business?

Hard work, word of mouth, and literally going door-to-door asking for business. In the beginning I had some business cards for each band, a calendar on the wall, and call waiting/answering machine. A typical scenario would have me see bands, talk to them, pitch our services, and then hustle for their business.

Hiring a good core group of people has definitely helped me grow my business as well. I try to hire people that push me. Winning is contagious and as a former collegiate tennis player I understand what it feels like to win. I never want to let my team down and it pushes to me to always be better.

What are the challenges that keep you up at night?

My last name is the first name of the company, so I constantly feel the pressure to make sure the business is growing, my employees are happy, and we are headed in the right direction. It is personal to me and the result is I want everything to be perfect. My philosophy is we are getting paid for a service and that service has to be perfect.

What do you consider to be your greatest accomplishment?

There are three that come to mind:

First, individuals that began their careers at Box Talent have grown in the industry and become professionals in their own right. I'm happy to have been a part of their education. Twenty years into this, I get a call nearly every week from an old employee. People grow up in front of you and it is very satisfying to be a part of their journey.

Second, we purchased several pieces of property in Norman on Campus Corner. Witnessing the revitalization and knowing that you've been a small part of the resurgence of an area of a community makes me proud. The area has progressed immensely from an empty group of storefronts to bustling businesses. My partner, Judy Hatfield is an amazing woman and business partner and she has a lot to do with the area's success as well. I smile every time I walk around our property or when Judy and I talk on the phone. It has been a lot of fun to a part of something big.

And finally, to know we haven't missed a payroll or one payment at the bank in 20 years of business.

What is your "If I'd known then what I know now?"

I probably would have set goals for myself back when I first started instead of just trying to operate a business. Goals help you focus your efforts and provide you with a roadmap. I just ran without a plan and went where the business was. I wasted a lot of time in the beginning going in circles, but gained valuable experience.

How has your position changed within the company?

I went from being a one-man show to now managing every aspect of the company and offer leadership and direction as needed. Before, I might have spoken with the bride, called several bands to see who was available, and then coordinate all the details. Now, I have other employees who do a lot of the detail work.

That said, my staff knows better because I still like to get my hands dirty in the details and do so all the time - just not as much as I used to.

What do you find personally rewarding about being an entrepreneur?

The best part is watching your team members do something great. I watched Cindy Post and Kym Johnston learn how to lead, manage and then run my business, sometimes better than I could have. The other trappings of success are terrific, but watching others carry out your vision is personally my favorite part.

What advice would you give to budding entrepreneurs?

1. You have to be passionate and patient in any business.

2. Surround yourself with great people and ideas and the rest will follow.

3. People want results and the truth.