Midwest City is a growing, progressive community located in the central part of the state just minutes from downtown Oklahoma City. It is the 7th largest city in the state (pop 56,000), is comprised of 25 square miles (within Oklahoma City MSA) whose southern border is Tinker Air Force Base. 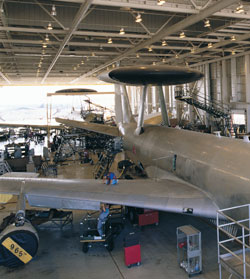 Midwest City is located along Interstate 40 and near "America's Crossroads" of I-35, I-40 and I-44 - a major national distribution hub.

Business Advantages
Midwest City's advantages have attracted such companies as Boeing, Pratt & Whitney, Rolls Royce, and an ever continuing list of the "Who's Who" of the aerospace industry. Located on Interstate 40 adjacent to Tinker Air Force Base and the Oklahoma City Air Logistics Center, Midwest City serves the business and community needs of one of the world's most significant centers for military aircraft sustainment.

Midwest City enjoys the greatest concentration of technology companies in the State of Oklahoma. It is the service community to Tinker AFB and a 5,000 acre military industrial complex located adjacent to the city's southern border.

The Mid-Del Career Technology Center Mid-Del Technology Center provides full-time and short-term educational programs and services to secondary and adult students as well as customized training for business and industry. Midwest City also has the highest median income in the state.

The area also features the Oklahoma Welcome Center, Senior Center,water park, championship golf and nature and recreational trails. Throughout the year, Midwest City is host to many unique special events such as: Star Spangle Salute in July, Global Oklahoma - A Festival of Cultures in October, Holiday Lights Spectacular in November and December.

The Midwest City-Del City School District is focused on academic excellence and provides a comprehensive educational program for over 14,600 students. Rose State is one of the nation's premier two-year universities - now with enrollment of over 8,000 on a 116 acre campus. The college provides customized training and certification modules for area businesses.