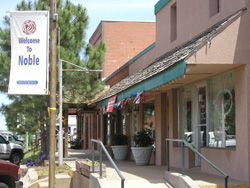 Noble is a growing community of over 6500 located just south of Norman and Greater Oklahoma City. It is an active "family" community, well known for its quality lifestyle, excellent school system and easy access to a major university and metropolitan area.

Noble is traversed by four-lane U.S. Highway 77, and four-lane Oklahoma State Highway 9, providing easy access to Interstate 35, just 7 miles away and near the major U.S. interstate crossroads of I-35-, I-40 and I-44.

It is located 26 miles from Will Rogers World Airport, and six short miles from Max Westheimer Airpark in Norman - one of the state's major business airports. The Amtrak Heartland Flyer passenger train runs daily from Oklahoma City to Dallas/Fort Worth - boarding in nearby Norman or Purcell.

The University of Oklahoma is only a few minutes’ drive north, while the entire Oklahoma City metro, including Tinker Air Force Base, is accessible via short commute.

Business Advantages
Noble's central location makes it ideal for business and residential growth. The community has low business costs, access to a major labor supply, a productive workforce, and plenty of development sites. The city offers excellent municipal services to accommodate the needs of business and industry.

The University of Oklahoma campus is just minutes away from downtown Noble. OU has emerged as a pacesetter for public higher education in the United States and is ranked by The Princeton Review among the top 10 public universities in the nation in terms of academic excellence and cost for students.

Education
The Noble community values education immensely. Its strength, as a rapidly expanding 5A school district, comes from the pride the community has in its schools and its 2,800 students. The Noble Public School District is well known for leading the way with a state- and nationally-accredited education system consisting of one high school, one middle school, and three elementary schools.

Quality of Life
Living in Noble combines the benefits of small town values and quality of life with easy access to the opportunities of a large metropolitan city. The community is now a growing residential and commercial business area offering quality amenities and a low cost of living.

Noble is known as the Rose Rock Capital of the World due to the predominance of the rare Rose Rock that can be readily found in a geological vein that runs nearby. The city hosts an annual Rose Rock Festival with music, crafts, vendors, food and fun each April. Residents and visitors also enjoy various other cultural events throughout the year including celebrations at Halloween, community dinners at Thanksgiving, an annual Christmas showcase, a golf tournament, Noble Bears sporting events and much more.

The community offers a variety of cultural and recreation opportunities including a new splash park, Little River Zoo, six wineries, Thunder Valley Raceway, the Timberlake Rose Rock Museum and many nearby lakes and rivers. Parks and recreation areas include: the 20-acre Ken King Park, 5-acre Dane Park and a new recreational trail in the seven-acre Riley Park. The Noble Public Library is part of the Pioneer Public Library system and hosts many educational and recreational activities throughout the year.

The City of Noble is named after James Noble, the U.S. Secretary of the Department of the Interior. Established as one of the original towns along the historic Santa Fe Railroad route from Kansas to Texas, it was established during the great land run of 1889.

The Noble community is one of Oklahoma’s best small towns with a big heart.