OKC: Energy's New HQ
Well-known for being a global oil capital (as well as for having a working oil well on the grounds of the state capitol), Oklahoma City's energy industry has developed significantly from its oil-intense beginnings. The Bakken-led shift to oil has been dramatic, part of a robust drive toward U.S. energy independence. Hundreds of energy companies here are growing rapidly, responding to the extraordinary opportunity the industry offers today. Importantly, all components are represented – large and small independents, midstream companies, service businesses, startups and spinoffs.

Renaissance and Revolution: The Reinvention of American Energy
Oklahoma City's energy entrepreneurs unlocked the shale revolution against all odds. In the 1990s, geologists with Mitchell Energy in Texas pursued an unpopular mission to make natural gas flow from the tight shale underneath Fort Worth. They were scoffed at, particularly by the majors who had long since gone looking for oil and gas elsewhere around the globe, convinced that what reserves remained in the U.S. would be prohibitively expensive to produce. But shortly after the 21st century arrived, George Mitchell’s persistence in the Barnett Shale began to show promise, putting the much-dismissed dream of springing gas from shale within striking distance.

Instead of dismissing the shale dream underneath Fort Worth, Devon Energy studied the data. And in 2001, bought Mitchell Energy. Adding horizontal drilling to the equation, Devon soon made shale gas flow at scale from the Barnett Shale, kick-starting the shale energy boom. Chesapeake Energy moved quickly on the idea that if it works in Fort Worth, it’ll work in other shale formations across the U.S. – and puts it to work in plays from Texas to Pennsylvania. The vast opportunities soon found CHK in several leading plays, including the Haynesville, Utica, Eagle Ford and Marcellus.

Continental used the new technologies to produce oil in a long-overlooked part of the country – the vast Bakken Shale. The play made history, reversing the steep decline in U.S. oil production. The company remains the largest leaseholder and producer in the nation's premier oil field and has led a revival in oil production in Oklahoma. SandRidge Energy is another innovation-driven E&P. Amassing seismic intelligence and introducing efficient new lateral well designs gained them wide notice, and they remain a prime player in extending the unconventional revolution beyond shales.

OKC-based manufacturers are benefiting from the surge. Kimray Inc., a leader in upstream oil and gas controls for 60 years, is expanding with a new HQ and plant. Balon, a third-generation, family-owned company, manufactures valves specifically for the oil and gas industry. Meanwhile, Baker Hughes is opening a new manufacturing center in OKC that will create 475 jobs over the next five years. This will be its only U.S. site to use robotics as part of its motor manufacturing. Elsewhere around the city, rapid growth is also seen in a who’s who of arriving titans and support forces – from Schlumberger and Halliburton to Accenture and PricewaterhouseCoopers. All now see they need to be in OKC.

Midstream Momentum
Vast opportunity for midstream companies is behind big leaps in OKC. Last year Compressco made news with its introduction of SuperJack to help oil producers capture natural gas for use and sale instead of flaring. In July, it bought Midland, Texas-based
Compressor Systems Inc. to ramp up horsepower to pump oil and gas from the wellhead to market. DCP Midstream is a full-service midstream logistics leader with a footprint of strategically integrated assets, now expanding its regional office in OKC. Innovation is creating new capabilities from newly launched companies. Midstream spinoffs are generating still more economic growth. Enable is a joint venture between CenterPoint Energy and OGE Energy Corp. with 11,900 miles of gathering pipelines. Still more spinoffs are emerging, such as the oilfield services brand, 77 Energy.

Landing a Gem in GE
The new energy landscape motivated GE to ramp up its oil and gas R&D to “drive technologies from every major continent.” Its nine research centers are in Bangalore, India; Shanghai, China; Munich, Germany; Rio de Janeiro, Brazil; Tirat Carmel, Israel and New York, California and Michigan. All are designed for collaboration among companies and universities to generate ideas and spur solutions to the challenges facing the industry. In April 2013, GE announced that OKC would join its global network of some 2,200 GE Global Research scientists and engineers. Soon another 130 hires in OKC will create a scientific brain trust without peer. Add the emerging partnerships with energy companies just down the street, and you can expect a flow of ideas and breakthroughs. 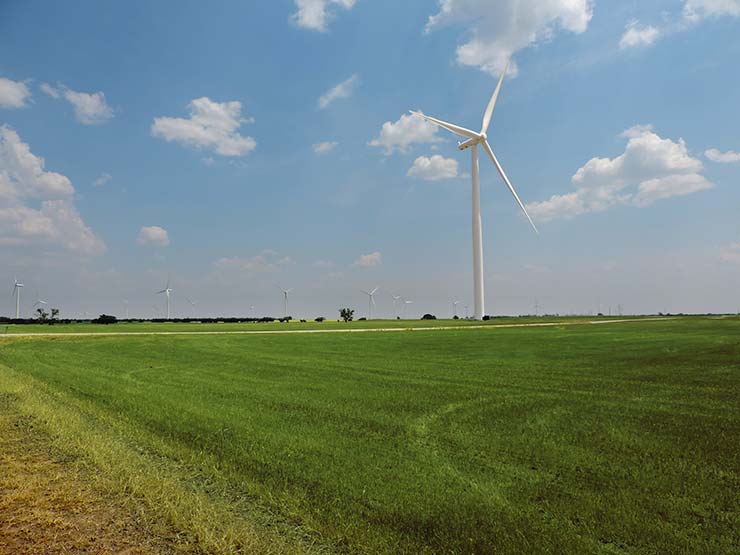 Alternative Energy Abounds in OKC
In addition to conventional energy, Oklahoma City offers it all when it comes to renewable and alternative energy. In our low-cost, business-friendly environment, it’s easy for production, manufacturing, engineering, and technical firms to produce, assemble, install and transport green energy equipment – while thriving in an environmentally friendly mode of operation. As the premier gateway to the nation’s “Wind Corridor,” no other location offers our powerful, sustainable combination of technical manufacturing proficiency and workforce; alternative and conventional energy industry expertise; centralized, readily accessible location; earth friendly raw ingredients to power the world today and tomorrow, like CNG, wind, and solar; and one of the most high-value environments around for solar/wind manufacturing and logistics.

Green Power Available Now
If you’re manufacturing for Green Energy, but your power needs are creating harmful emissions and/ or taking their toll on your balance sheet, you should take a look at Oklahoma City. OGE Energy Corp., Central Oklahoma’s power utility, offers 100 percent renewable windpower via Renewable Energy Credits that provide some of the lowest costs in the U.S. And that makes profitability even easier to attain – while also being good to the earth. Other green innovations, like recycling otherwise harmful methane gas from a landfill to power industrial equipment, are being implemented right now - profitably - in OKC. Contact us today and see how companies like Dell, Boldt, and AAA find it both easy and cost-effective to commit to sustainable operations in Oklahoma City.