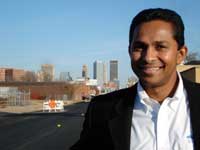 Objectstream Inc, an IT Management and Consulting company, made a stunning first time appearance on the Metro 50 list of fastest-growing privately owned companies in the Greater Oklahoma City Metro Area.

Objectstream grew 1,222 percent over three years to earn this distinction as the No. 1 fastest growing company in Oklahoma City for 2008. This spectacular growth as an Oklahoma City-based information technology consulting firm brought unexpected, but well-deserved, recognition for a company founded only four years ago.

We were ecstatic, Objectstream co-founder and President Biju Kurian said of the Metro 50 honor. We knew we were growing at a fast pace, but we never expected to be No. 1.

Objectstream services both state and federal government clients, including the Federal Aviation Administration (FAA) and the State of Tennessee. It provides a broad range of information technology services ranging from developing customized software applications to IT management and consulting to hardware and network support.

The seeds of this success were sown when a young man from a small town in India came to the United States to pursue his dream of higher education. A recommendation from an Oklahoman friend of his father led this young man to Oklahoma City University in the 1990s, where the native of India earned his MBA.

This young man was none other than the Objectstream co-founder and President Biju Kurian.

Around the same time, Biju Kurian became friends with Shyam Nagarajan, his business partner in Objectstream. This friendship continued to grow over the years even as they went their separate ways after completing their respective educations.

After graduation, Biju stayed in the Oklahoma City area and put his IT skills to use as a consultant for the FAA. Years later, in 2004, Biju and Shyam co-founded Objectstream.

Objectstream grew to a 40-employee company in the short span of four years. It is now recognized as a trusted partner of the FAA and the State of Tennessee in their various IT initiatives.

Objectstream is now expanding its services to include a new range of clients that need help with their IT requirements ranging from IT infrastructure to IT systems.

Information Technology can be applied to the oil and gas business, the newspaper business, etc.; every company has a need to automate in order to efficiently run its business. says Biju.

In a conversation at the Objectstream headquarters in west Oklahoma City, Biju discussed his life as the CEO of a growing technology business. Here are excerpts:

Q: What are the major contributing factors for the growth of Objectstream?
A: We started Objectstream with a simple, but powerful, motto: Excellence in everything we do. We recognized that achieving excellence is a function of two major factors: highly motivated and skilled team members and developing a complete understanding of the problems/issues faced by our clients. We call these two factors: Employee-focus and Customer-centricity and believe that these factors were major contributors to our success.

Q: Why is Oklahoma City a good place to start and grow a business?
A: Oklahomans are wonderful people, always ready to help, and when it comes to work, the values and work ethic are just par to none. We have some of the best people in Oklahoma or in the nation working for this company. They are so loyal, work so hard, always go the extra mile and are ready and willing to help. They are the reason we are getting repeat business.

Q: How does Oklahoma City compare with cities in the so-called tech-hubs in California, Texas and elsewhere?
A: Im pretty sure we can compete with San Francisco or Austin or New York when it comes to IT in the long run. Because of the MAPS project and the way OKC is growing, we should be able to attract wonderful large IT firms here. And Objectstream is positioned to get more business within other industries such as the oil and gas industry. Actually, because of the Metro 50 I am getting resumes every day from several great individuals.

Q: Does Oklahoma Citys location present any challenges to hiring qualified people to work in information technology?
A: Sometimes, yes, we have challenges, but we have also been able to attract people from other states to move here. Thanks to the MAPS Project, the development of Bricktown, the Canal and other projects that are currently under way, including the development of the Arts here in Oklahoma, people can see the advantages of life in Oklahoma City. For instance, you can reach the airport from anywhere in Oklahoma City in 20 minutes; and the people here are great!

Q: What motivates you to come to work each day?
A: Im a people person, so I like the constant interaction with my customers and my team. I enjoy that. Its a challenge because new needs of the customers, unanticipated yesterday, present an immediate need to strategize. Sometimes we have only an hour to strategize and secure the solution. You dont have much time; there are other companies vying for your business.

Q: How does Objectstream distinguish itself?
A: We are an Oklahoma company and we are hiring Oklahomans. We have a great story to tell. The core concept or core factor in any business relationship is trust. We have been blessed in that we have been able to build that trust. I believe that is why we were able to grow because sometimes the customers ask for Objectstream by name. That is really a blessing. They know us and know we have done a great job for them.

Q: What advice do you have for would-be entrepreneurs?
A: Do not try to do too many things. Try to find your core competency. Information technology is very diverse. IT can be divided into several subsections, and no one is good at everything. So you find your niche and then try to excel at it.