Dr. David Albert wears the titles of physician, entrepreneur and businessman, but is most comfortable being identified as an "inventor."

But don't expect to find him tinkering on some new gadget in the garage of his Oklahoma City home. 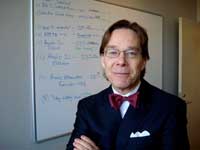 "I'm kind of a 21st Century inventor," Dr. Albert said with just a touch of humor. "I have tinkered in my basement as opposed to my garage because my basement is warmer than my garage."

The only son of the late Speaker of the U.S. House of Representatives, Carl Albert, Dr. Albert earned his undergraduate degree from Harvard University and medical degree from Duke University.

“Nobody is as passionate about your idea as you are. It's the pride-of-authorship notion. Therefore, until you get to a certain stage, the inventor is often the best advocate.”

But he has pursued the life of high-tech inventor and entrepreneur from Oklahoma City.

From his Oklahoma City base, Dr Albert has perfected devices as varied as a wireless monitor for a hospital patient's vital signs to a fire alarm that alerts users of the high frequency alarm of a smoke detector.

Albert's resume includes medical device companies he founded and later sold, including Corazonix, founded in 1985 and sold to Arrhythmia Research Technology in 1991; and Data Critical, founded in 1995, taken public in 1999 and sold to GE Healthcare in 2001.

Today, he is pursuing the commercialization of a low frequency smoke alarm system in an Oklahoma City-based company called InnovAlarm, which operates through its subsidiary as Lifetone Technology. The company expects to begin sales in spring 2009 of its $200 Lifetone HL Bedside Fire Alarm and Clock through a network of retailers that specialize in servicing the hearing impaired population.

Dr. Albert recently discussed his life as an Oklahoma City-based inventor and entrepreneur. Here are excerpts of that conversation:

Q: What distinguishes you as an inventor?
A: I have 22 U.S. patents and more that are pending. Companies like General Electric and Hewlett Packard have licensed my patents and technology. I have pursued the commercialization of my inventions by starting companies, so by definition I became an entrepreneur. But at the base I'm an inventor.

Q: You've been working for more than four years to develop a low frequency fire alarm and commercialize it through the Oklahoma City-based company you founded. Why spend so much time and effort doing it yourself?
A: Nobody is as passionate about your idea as you are. It's the pride-of-authorship notion. Therefore, until you get to a certain stage, the inventor is often the best advocate.

Q: Yet, you've founded a company, hired management and sales staff to carry out commercialization of the smoke alarm.
A: In today's world, a single inventor – I'm not going to say they are obsolete, but it takes a lot of people to take a product (to market). Marketing, sales, packaging, manufacturing, advertising, PR, quality, HR, financial, legal, you can't even imagine. There are so many aspects that go into the commercialization of a product, and it's hard to do that by yourself.

Q: Why is Oklahoma City a good location for you to both invent and commercialize your technology?
A: Oklahoma City happens to be my home and my four kids were born here. I am not sure that I believe in the notion that location is important. As a matter of fact, in the 21st century, we are the beneficiaries and we are challenged by the notion that location is less and less relevant. I get on the Internet, where am I? I have access to libraries in China and they have access to libraries here, and information and they can look at our patents. Thomas Friedman, the New York Times columnist, wrote the book "The World Is Flat." Well, it is.

Q: So, you're saying that Oklahoma City's location is irrelevant to developing technology and a business?
A: I want to live here in Oklahoma City. Does that inhibit me from doing anything? Absolutely not. So, what you see is a concentration. Oklahoma in general, and Oklahoma City in particular, has a concentration of people with interests, experience and expertise in energy. So we have people like Aubrey McClendon and Tom Ward and Larry Nichols and Harold Hamm who are energy entrepreneurs. They would tell you it is a great place to live, and, oh by the way, it's their home.

Q: How has Oklahoma City evolved in the past couple of decades?
A: We are the beneficiaries of people like Stanton Young and (former Oklahoma City Mayor) Ron Norick. Oklahoma City has had a renaissance in the last 20 years. We are in the middle of a global economic crisis, but Oklahoma City is 10 times the city we were 20 years ago. That hasn't changed. Whether you go to a Thunder game or your office in this park (Presbyterian Health Foundation Research Park) right here, it's phenomenal. The quality of life right here in Oklahoma City, the things we put into that equation of quality of life have improved.

Q: How do you want to improve on Oklahoma City's quality of life?
A: I want to build knowledge jobs. To be honest with you, those knowledge jobs include people who do all kinds of things; you don't necessarily have to have engineering degrees. But I can tell you they are the types of jobs we want people to have, and education is critical. So, MAPS for Kids and the money that is put into higher education are critical elements for us. We hire people here from Oklahoma. My engineers and scientists are graduates of OU and OSU. We will be hiring more of them.

Q: How has the Research Park contributed to the development of your product and your company?
A: It's been phenomenal from the beginning. I had a one-room office when we started InnovAlarm. It gave me a place I could come. The conference room facilities, the board room facilities, I've used them from the beginning. The ability to use and to interact, whether it's i2E – the state seed fund is an investor in our company – and (i2E CEO) Tom Walker and (former i2E CEO) Greg Main are right down the way as well as people who are outsourced services. Oklahoma City has a critical mass of entrepreneurial people now, at least in this location. I think that is a huge asset.

Q: What's fun about building a company from scratch?
A: It's fun to see an idea go all the way to creating value in other people's minds; to delight your customer, whether that's a health care invention or the Lifetone HL. That's something as an entrepreneur and inventor, you have to keep in mind there are other people how help you design, market, provide advertise; there are many aspects. Often times inventors are very myopic about ‘this is what's really key.'