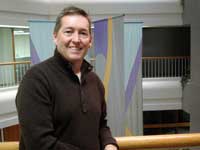 Ed Evans had never been to Oklahoma City before he was recruited from BellSouth to serve as President of Dobson Communications in 1996.

Single and upwardly mobile in the wireless telephone industry, Evans figured he would make Oklahoma City a temporary career stop. Other destinations and management positions awaited.

Evans built Tampa-based Syniverse and took it public all while living here and working from an Oklahoma City office.

"We've rooted here and, frankly, there is a great work force here," Evans said. "It's a great place to raise a family. We've got three boys. It's just an incredible family environment. It really is a great place, between the school system and the people of this state."

Now he is building yet another wireless technology company  Stelera Wireless  that is headquartered in Oklahoma City, although it does not serve a single Oklahoma customer.

Oklahoma City could not have a bigger cheerleader than this Florida native.

"There are bigger cities to live in...," Evans said. "But I don't think you are going to find anywhere that has the people. Talk about it taking a village to raise a kid... I don't think there is any better village in the country than what we have here. It's just a great place."

Stelera Wireless is unique among the nation's wireless service providers. It provides only wireless broadband services to its customers, most of whom are located in rural areas that are underserved by high-speed Internet providers.

"I've been in this business for over 20 years, and the last thing this country needed in my view was a sixth or seventh cellular telephone provider building out in those markets," Evans said. "Obviously, rural broadband or Internet service out in Rural America is lacking pretty substantially."

Stelera bid for and won licenses to operate wireless networks in 45 rural areas in 10 states, but none in Oklahoma. It is financing the buildout of its wireless network through low-interest loans provided through a U.S. Department of Agriculture loan program designed to bolster the wireless infrastructure in rural America.

Stelera began operations in January 2008 and by the end of the year it was providing service in two Texas communities. It expects to turn on its wireless networks in 55 rural communities by the end of June 2009.

Evans recently discussed life as an Oklahoma City businessman and his new venture. Here are excerpts of that conversation:

Q: How has Oklahoma City changed since you moved to the city as President of Dobson Communications in 1996?
A: It's amazing to me. It's dramatically different. When you look at everything the city has accomplished, with the MAPS project, what we've done to the school system, what we've done to the downtown area and the businesses that have been attracted to the downtown area. I can remember going to downtown when I got here and being depressed. It was a very different place at that time, and I give Ron Norick and the entire administration that was in place around that time a tremendous amount of credit for what they did. They revitalized the city.

Q: How many employees do you have and what type of growth do you see for Stelera Wireless?
A: We have about 30 people here currently. I think we are probably looking at 50 to 75 employees by the end of 2010, and expanding very rapidly as we go forward after that.

Q: What challenges do you face by operating from Oklahoma City?
A: I think the biggest challenge for me was just trying to buy licenses here (in Oklahoma) when we were going through the auction process. I was pretty interested, obviously, in trying to build something a little closer to home than what weve been able to do so far. But there was such interest in the wireless spectrum here that the pricing got to be substantially higher than what we could make work with our business model. So I think that was the biggest frustration for me, that there was a tremendous amount of interest in the wireless licenses in Oklahoma.

Q: Do you see any Oklahoma wireless licenses in your future so you can provide the wireless Internet service in the your home state?
A: I think there will be. When AT&T acquired Dobson, there was a fair amount of excess spectrum, if you will, between those two. So I think there is the possibility of either acquiring or leasing some spectrum in Oklahoma.

Q: How do you see your business evolving?
A: While today we are focused on the wireless side of taking broadband to people's homes. I think the company is not afraid of doing fiber to the home and actually laying fiber and not having to do it wirelessly. We are really a broadband company that is focused on delivering broadband through whatever mechanism that we can. Today that is wireless because that is a very cost effective way to do it. But if the incentives are presented that President-elect Obama has in his plan currently, I think there is going to be a lot of incentive to go out and build fiber to rural cities and well be capable and wiling to do that as well.

Q: You were among the ownership group that helped bring the Thunder to Oklahoma City. Are you still an owner?
A: I am actually the guy who negotiated the deal to bring the (then) Sonics here. I sold out my ownership early. We had a lot of guys who were interested in it. I was pretty focused on this business (Stelera) at that point in time.

Q: You bought the Oak Tree Golf Club and its championship course in Edmond last year; how has that project gone for you?
A: It's good right now. Were about 85 percent of the way through the course restorations. That project is pretty exciting to us. And when people see what we've done in June, July, when we get reopened, I think it's going to be pretty exciting.

Q: What motivates you to come to work each day?
A: I'm fortunate that my last two deals were very financially rewarding for me. It's not a situation where I have to come to work each day worrying about how to make the mortgage payment anymore. So when we started looking at this, it was me and a coupe of guys from Syniverse who started this thing. The first rule was that it's got to be fun. I loved the cellular industry when it was growing in its infancy, it was just fun. What we're doing today, it's just fun. That's the bottom line; I love coming in there and doing something that nobody else has done. And it's an opportunity for us to give back to rural America, if you will. We have the ability to improve the lives of people.

Q: How do you describe yourself?
A: I guess 'serial entrepreneur', for the lack of a better term. I don't know how to describe it. I've been fortunate to be around some great people. The Dobson family is one of them. I learned a tremendous amount from that family. The leadership at BellSouth was great. So, yeah, I'm a serial entrepreneur at this point.