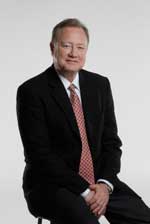 Oklahoma City has an unfair advantage over cities with which it is competing for new business and economic development, says Gary Nelson.

A 20-minute rush hour, he says with a laugh. If you ever live in the bigger cities you spend so much time (commuting). But thats just a small piece of it. The people that run our city are honorable individuals that really care about the citizens and companies.

Nelson, who in 1992 co-founded the Oklahoma City-based check imaging business Advanced Financial Solutions (AFS) and built it into a major player in the financial services industry, recites a long list of advantages that Oklahoma City offers businesses seeking to establish some roots.

At the top of the list is the way that the MAPS projects remade and revitalized downtown Oklahoma City. Hotels, sports venues, restaurants and entertainment areas all emerged from the $300 million project begun in the mid-1990s.

But there is the intangible, as well.

Ill say this, Oklahoma City has a good culture, said Nelson, who sold Advanced Financial Solutions to Milwaukee-based Metavante Corp. in 2004. Oklahoma City has something special. At AFS, we had a 1 percent turnover rate, which means we kept 99-plus percent of our employees. You cant do that in Dallas, Denver, L.A., anywhere on the East Coast, Chicago; thats unheard of.

Its that thing we talk about in Oklahoma a lot; its the culture of the people; its the opportunities that you have here.

Nelson has more recently co-founded another high-tech company known as iThryv, which will focus on providing financial literacy education for schools and financial transaction software for the financial services industry.

Gary Nelson recent discussed the advantages Oklahoma City offers a high tech startup, as well as his vision for financial literacy among young people in Oklahoma and beyond. Here are excerpts of that conversation:

Q: How did AFS revolutionize the banking industry?
A: You look back at banking, some of the things that AFS did, we were the first ones to invent image statements. There was a time when you got all your checks back and then when we applied some technology to it all of a sudden you didnt get your checks back. You got images of your checks.

Q: How did you conceive the concept for iThryv with co-founder Scott Klososky and other partners?
A: We were just thinking, How can technology change culture? When the economy was flying high about a year and a half ago we had an idea that this thing cant continue. The debt load for individuals, especially those 24 and under, is an epidemic that we dont talk enough about. And nobody is teaching any financial principals.

Q: But why software and Web applications and not financial literacy classes?
A: The old paradigm of somebody getting up and lecturing about financial literacy, it just doesnt work. You take it in conjunction with the social networking phenomenon. What young people dont do is learn from people. They learn from technology; they dont learn from lecturing on subjects like financial literacy. The idea was that we could develop some cool software and a platform that young people ages 6 to 24 would actually want to visit on a regular basis and they can play some games and they can collect some frequent-flyer type points and they can spend those points. But at the same time, they are actually learning financial principles. We have an educational site called wePROSPER that we are actually going to donate to any type of educational process that wants to implement that as part of their learning.

Q: You can make a difference with this?
A: Scott and I and the team at iThryv believe that technology, started early enough, can change the culture and the habits. Weve done a poor job in society of training for financial literacy, and maybe thats because the parents dont know it; the government, obviously, doesnt know it; nobody is talking about it; nobody is training.

Q: Whats the most exciting aspect of a technology startup?
A: There is a certain rush you get from building something from nothing. These ideas that we have now with iThryv and wePROSPER, they will be just as successful as we are smart enough to make them. I kind of like that. There is no road map; to our knowledge nobody has done what we are doing here.

Q: Whats the most challenge aspect of a start-up?
A: There are things common with any start-up. People dont like to fail; some people are afraid to fail. If you want to start up a company you cant be afraid to fail. You just have to surround yourself with smart people; you have to have partners willing get on board with your product. You have to raise some funding; you have to have a solution that people want.

Q: What advice would you have for would-be entrepreneurs?
A: i2E (not-for-profit company that mentors technology-based start-ups) has a great program, and we dont think its great just because its in Oklahoma. The i2E program has been recognized on a national level. So, if I was thinking about a start-up, my suggestion would be to use a facility like i2E to help. Then outside of that, an entrepreneur has to have a sense of timing. You have to somewhat time the market with your solutions. Ive seen people come to market and have a nice idea but they are way off on their timing. You have to pick your time and your partners; you have to have a few foundation partners who are willing to take some risk on you as an individual. And networking. There are a lot of networking resources in Oklahoma City. You have to get in that stream. You cant be the Lone Ranger.