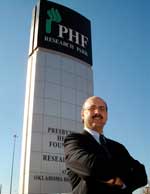 For almost 20 years, Scott Rollins served as a textbook example of the so-called brain-drain phenomenon that lures bright, educated Oklahomans to careers elsewhere.

Raised in Moore, Rollins earned his undergraduate and graduate degrees at the University of Oklahoma Health Sciences Center and did research work at the Oklahoma Medical Research Foundation while working on his Ph.D.

Then he left the state to accept a post-doctorate fellowship at Yale University.

Rollins lived in Connecticut for almost two decades and was part of a team of Yale researchers who co-founded a company in 1992 called Alexion Pharmaceuticals.

Rollins helped build Alexion into a publicly traded success story that today is traded on the Nasdaq market and claims a market cap of $2.6 billion.

Along the way he teamed with fellow Oklahoma native Russell Rother to develop and win FDA approval for a drug known as Soliris, which treats a rare blood disease known as PNH. Soliris has been called a miracle drug by those it has benefited, including some Oklahomans.

Rollins returned to Oklahoma City in early 2008 when opportunity arose to become CEO of Selexys Pharmaceuticals, a promising new life sciences company based in the Presbyterian Health Foundation Research Park.

Selexys was a great opportunity in terms of the science and the drugs they were developing, Rollins said. I think its a spectacular opportunity to build an Oklahoma-based biotech company.

Selexys is working to develop and commercialize a drug to treat devastating inflammatory diseases such as Crohns and Sickle Cell.

I had offers to become the CEO of companies in Connecticut, in North Carolina, in California and everywhere else that I turned down because I didnt want to live in those places, Rollins said.

In a conversation about what led him back to Oklahoma, Rollins discussed changes in Oklahoma City and his decision to return to the city to take the helm at Selexys. Here are excerpts:

Q: What are the most profound changes in Oklahoma City since you left in the early 1990s?
A: From a biotech development standpoint, obviously, its the build out of the Presbyterian Health Foundation Research Park that has been dramatic over that period of time. It has grown from one building to seven or eight buildings. In general, Oklahoma City has undergone a substantial urban renewal project that has transformed the city. Now you can bring people into Oklahoma City and impress them with just the amenities and the beauty of the city as opposed to what it was 20 years ago. Its remarkable. I can remember as a graduate student when urban blight was everywhere, and its just gone. Its gone and replaced with great places to go and eat and fun things to do and a professional sports team. I would have never guessed that we could have attracted a professional sports team.

Q: Why can Oklahoma City be a location in which a life sciences-based company can grow and flourish?
A: There are spectacular facilities in the Research Park and great science coming from the OU Health Sciences Center and the OMRF (Oklahoma Medical Research Foundation). There is the possibility of raising small amounts of early stage capital. The challenge is going to be raising the substantial amounts of capital that are necessary to move drugs into clinical development.

Q: How does the Research Park benefit a growing life sciences business?
A: The facilities are second to none, and the lease rates are a third of what the lease rates were in a state like Connecticut. For Selexys, in particular, a company that is developing monoclonal antibodies, the fact that Cytovance Biologics is here in the park and we can partner with them as a manufacturer at a lower cost than we could outside (Oklahoma), thats a plus.

Q: What role did your roots here play in your return to the city to run Selexys?
A: Im an Oklahoman. This is where I was born and raised. This is where I want to be. My family is here. My wife, Maryann, is an Oklahoman. Everybody is excited. All the grandparents are here; brothers and sisters are here. There was a great business draw for me in Oklahoma, but there was a great personal draw for me as well.

Q: What is the personal accomplishment for which you are most proud?
A: Definitely its the development of Soliris. I invented, developed and gained FDA approval for a drug for a very devastating blood disease. So its a true bench to bedside drug development story I can lay claim to.

Q: What excites you about going to work each day?
A: Its the prospect of developing and commercializing important new therapies for Sickle Cell disease and for Crohns disease and doing that in Oklahoma.

Q: What advice would you have to entrepreneurs starting out in Oklahoma?
A: To me, you have to start with great science that is well protected with intellectual property, and you have to bring in management that has the experience to move things forward.