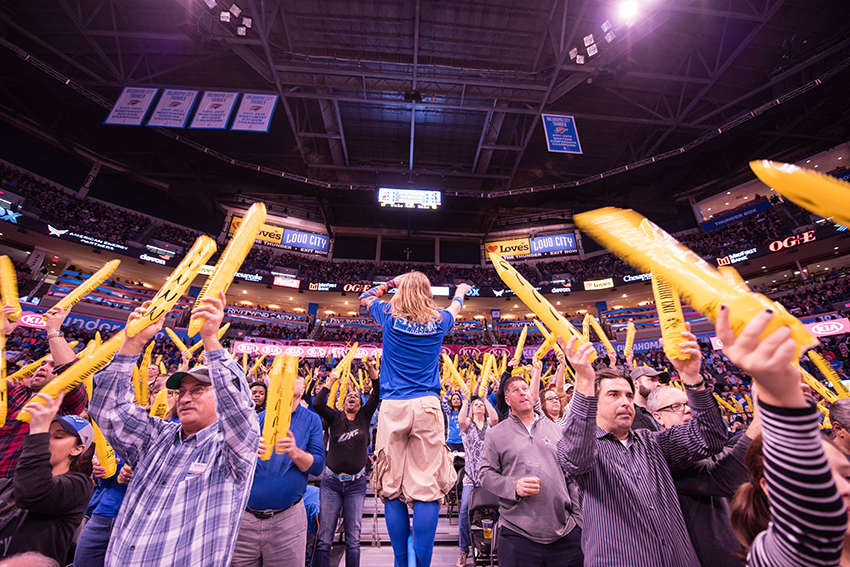 It was a common love of innovation that drove the Oklahoma City Thunder to expand its partnership with Love’s Travel Stops and Country Stores.

Love’s is the only retailer featured on an NBA team’s sponsorship patch. Other sponsors include The Walt Disney Studios, Goodyear Tires and General Electric.

The Oklahoma City Thunder is the final team in the league to get a sponsorship patch. The NBA has allowed teams to have the patches since the 2017-2018 season. The Thunder team will sport the new patch for the first time at the game against the Golden State Warriors on Saturday.

Bryan Byrnes, the Thunder’s senior vice president of marketing and sales, said the team spoke to about six other companies before working with Love’s. The patch is part of a four-year sponsorship extension, though Love’s has been with the Thunder since the team’s first season in 2008.

The company’s logo can be seen on the arena’s third level in Love’s Loud City. It’s also on the kiss cam. During the games, the video screens switch to yellow with the Love’s logo streaming across.

But with the travel stops and country stores in 41 states, not everyone gets to see the company’s involvement with the team firsthand.

“This shows Love’s in a different way than the arena,” said Jenny Love Meyer, vice president of communications at Love’s Travel Stops.

Meyer said having the company’s name on the jersey lets people see how the two brands’ core values align. At Love’s, the company supports growth through innovation, hard work, and taking care of its employees and customers, she said.

The company has already attached its name to two pro-innovation entities in the metro. At the University of Oklahoma, the Innovation Hub is named for Love’s co-founder, Tom Love, Meyer’s father. The company also sponsors i2E’s annual innovation competition, the Love’s Cup.

The Thunder is supporting innovation as well in the state with its Thunder Launchpad. The third class will feature 11 companies. Love’s will present commercials about those companies during Thunder games and on social media.

Working with a retailer gives the Thunder a platform to reach a different audience as well. There could be Thunder videos shown at the fuel pumps or advertisements at cashier’s counters.

“The opportunity for us to deliver a national profile to Love’s was important to us and to them,” he said.

Meyer said the partnership will be demonstrated in the city as well, since the Thunder and Love’s are involved with the Boys and Girls Clubs of Oklahoma County. Byrnes said the details of a new community program are still being finalized.

“The opportunity to take two bellwether brands in Oklahoma and tell a national story resonated with the both of us,” he said.