Published: Thursday, May 2, 2019 By: Daisy Creager Source: The Journal Record 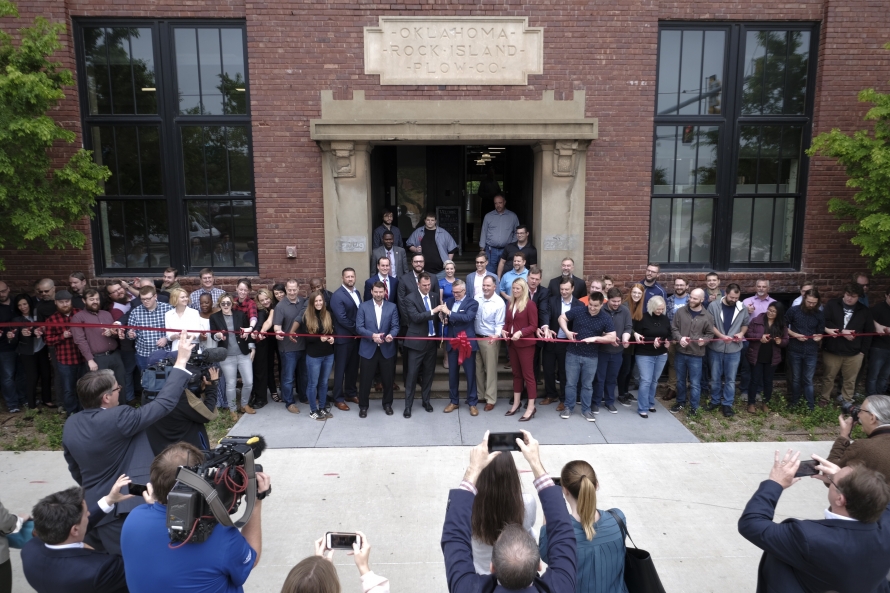 Atlanta-based software developer Rural Sourcing Inc.’s Oklahoma City office is now at 60 of its planned 150 employees and has moved into its new location in the Rock Island Plow Building.

The company began operations in Oklahoma City in October, hosting employees in a temporary office space rented from StarSpace46 Inc. while renovations were made in the Rock Island Plow Building. It hosted a ribbon-cutting ceremony Wednesday to celebrate the location change.

RSI’s move brought the Plow building to full capacity. The company is leasing 20,000 square feet across two floors in the building, which is at 29 E. Reno Ave. in Bricktown. The remaining 90 positions will be filled in the next 12 to 15 months, Chief Executive Officer Monty Hamilton said.

The Greater Chamber of Oklahoma City approved a $450,000 performance-based economic development agreement for the company on Dec. 18.

Hamilton said the quality of life and talent pool in Oklahoma drew the company here.

“That (quality of life) will allow us to keep more of your homegrown talent right there at home in Oklahoma, and what it’s also going to allow us to do is attract back some of that talent you lost to Silicon Valley or New York City or Austin, Texas,” Hamilton said.

“We want those folks back in Oklahoma working here.”

Sunny Cearley, vice president of membership with the Greater Oklahoma City Chamber, said a variety of employment options in someone’s skill set can attract the person to an area, so the addition of a technology business will attract more tech professionals.

“It helps us further that tech space to have a major employer like this here who can add to that realm of opportunity for the talent pool to say ‘yeah, I could move to Oklahoma City,’” Cearley said.

At the ribbon-cutting, Teresa Rose Crook, director of the Communities Foundation of Oklahoma, said the region has tremendous partnerships helping it attract entrepreneurs.

“When you chose to move your business to a new location, it is a long-term commitment, and we are committed to supporting you (RSI), helping you, cheering you on with your success and we can’t wait to see what you’re going to do in our community,” Crook said.

Hamilton said the partnerships RSI has made have created “a great marriage” between the company and business community.

“We’re looking forward to so much success … I couldn’t be happier. Thank you for welcoming us into Oklahoma City with huge, wide arms.”