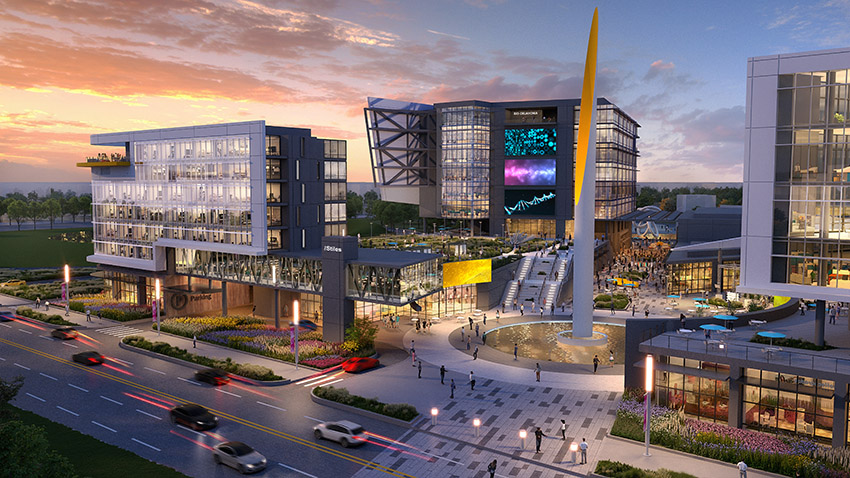 Just before the end of December, two of the region’s biggest developers announced the biggest project of the year. Gardner Tanenbaum and Robinson Park Investments are teaming up to build a 2.7-acre development at the Innovation District.

Designed by FSB Architects, the 400,000 sq. ft., pedestrian-centric layout features research labs and office space, a hotel, retail space, and a public realm providing an open-air community environment. A key feature of the project is the proposed MAPS 4 funded Innovation Hall, a central place where activities to grow Oklahoma City’s innovation economy can be facilitated.

The Greater OKC Chamber sat down with Mark Beffort, Robinson Park, to learn more about the plan.

VeloCityOKC: This plan is bold - really taking the components in the master plan designed by Perkins and Will to another level. What motivated the partnership to go down this path?

Mark Beffort: This originally started when Baker Hughes offered a small portion of their site to Dick Tanenbaum. He and I began looking at the project and thinking about how we could make something work with a single 200,000-square-foot building and it just wasn’t enough. When we kept going south and looked at the full project, we realized we could really make something dynamic happen.
We are both really excited about the potential the innovation district brings to our market. We didn’t want to just talk about it, we wanted to really executed on the vision for our community. If someone doesn’t take the ball and run with it, it just won’t happen. We believe this needs to happen -- so we picked up the ball and we are running as hard and as fast as we can.

Why do you think the innovation district and this project are important?

We believe this project will change the fabric of Oklahoma City, in much the same way the Devon Tower accomplished that in downtown. Projects like these bring high quality amenities and spaces. When people interact in collaborative and clustered environments, it elevates how they relate to their community and to each other.

What influenced the components of your plan and where did you get your inspiration for the development?

We studied what makes a project like this successful, and one of the key element is having multiple universities working together to foster innovation. Having the presence of Oklahoma State, along with the incredible assets the University of Oklahoma has here, sow those seeds for success.

The design of the site is shaped in a V, with OSU at one end of the V and OU at the other, with Innovation Hall very intentionally located at the center.

This is a big project with a somewhat specialized tenant base. Many might have expected a national