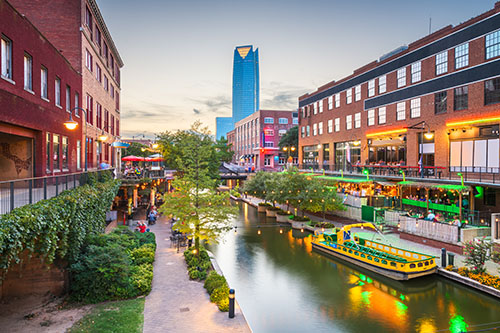 As co-founder and CEO of Podchaser, a podcast discovery venture that bills itself as the “IMDB for podcasts,” Bradley Davis built a distributed business in which employees can live and work virtually anywhere in the world.

Davis and his family were living in Louisville, Kentucky, after Podchaser was founded, raising startup capital to seed growth of the company that today is considered the industry’s leading podcast database and source of podcast information.

Then he accepted an invitation to visit Oklahoma City where his sister, Rachel, lives.

“After visiting there, I was shocked by how cool it is,” Davis told Lt. Gov. Matt Pinnell on the Innovate That podcast, which is hosted by Pinnell and sponsored by the Oklahoma Center for the Advancement of Science and Technology.

Davis and his wife, Rose, had been considering relocating to another midsized city, and Oklahoma City sold itself to the couple. It had a cool vibe generated by the MAPS project, pleasing amenities and a population growth that far exceeded the national average.

“We visited a few times and decided ‘let’s move here,’” Davis said. “I just had some family in over the weekend, showed them the Plaza District, the Paseo, the lake. It’s a beautiful city, and there’s so much here that you can’t pack it in, in a two-day period.”

So, today, OKC is home not only to the Bradley Davis family, but also to his fast-growing company.

Podchaser was founded in 2016 by Davis and three others, two of whom he knew only through an online association on a Reddit thread. Two co-founders are in Australia and a third lives in Hawaii.

Each had an interest in listening to and discovering new podcasts but had no access to in-depth information that would point them to new and interesting podcasts they could sample.

So, they decided to build the site they envisioned and called it Podchaser.

The Podchaser website, podchaser.com, describes it as, “The site to visit to find anything and everything there is to know about podcasts. Its crowd-sourced format allows users to review podcasts, create playlists, edit pages for content creators and so much more. A really cool, creative idea.”

Today, the company has approximately 30 employees scattered across the globe. It has raised $6 million in capital to support its growth.

Now as an Oklahoma City insider, Davis sees the value of the Oklahoma Innovation Model, which is a partnership between OCAST, i2E, the Oklahoma Manufacturing Alliance, the New Product Development Center at Oklahoma State University and the Tom Love Innovation Hub at the University of Oklahoma.

“I think i2E and OCAST are awesome,” he said. “I think it’s great when the third party can look at the whole pie and figure out how to connect all those dots. That saves time and increases efficiency. The point of all of this is to get behind unicorns and hit big home runs.”

Now that he’s an Oklahoman, Davis has networked with other Oklahoma City business founders and sized up the available local capital sources.

“I’ve found so many cool founders and business owners in a short time,” he told Pinnell. “How I view Oklahoma City for me is it’s my home base, but it also has a great airport, and I can go to Colorado if I want to see the mountains, or I can go to southeast Oklahoma or wherever. I can have a beautiful massive house here for (comparatively) no money, raise a family and be around a state and city with incredible family values.”

Davis’ enthusiasm for his new adopted home has not waned, despite challenges brought on by the pandemic and an unusually harsh winner.

“It’s been wonderful,” he said.

Listen to the Innovate That podcast with Bradley Davis at https://innovatethat.podbean.com/e/podchaser/.

Jim Stafford writes about Oklahoma innovation and research and development topics on behalf of OCAST.